I thought that since I posted a long, sappy post about Keilana, it was only fair to do a post about Dylan.  Dylan is a weirdo.  Delightfully so, but a weirdo all the same, so I thought perhaps a few pictures might do him more justice than my words could do.
Doug thinks that Dylan is very smart. I'm still undecided, 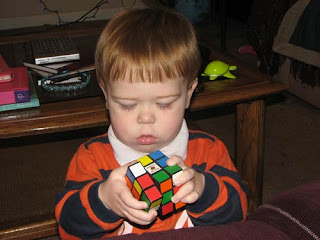 But the Rubik's Cube is one of his most favorite toys.   He looks quite focused here, but really he always looks like that. 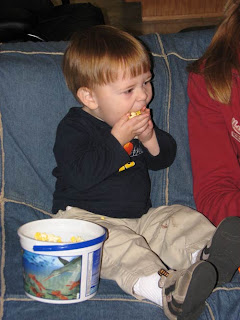 So here he is enjoying some popcorn at one of our latest YW activities (he is also a HUGE flirt and is usually in quite a good mood whenever the house is full of girls).  I know a lot of people who eat popcorn lik
e this, but
Dylan eats everything like this. He stuffs, by handfuls, as much as he can fit in his mouth, and then frequently has to hold the food in while he chews.  He also has a tendency, like his sister before him, to store food in his massive cheeks and then spit it out at you when you don't quite expect  it.
Dylan is obsessed with cars.  Pretty normal for a two year old boy, I suppose. He usually has at least one in each hand no matter where he goes, and he somewhat compulsively lines them up on our windowsills, couch arms, 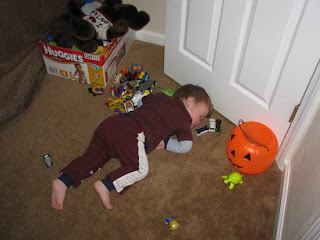 coffetable, etc.  He drives them all around the livingroom, but can't drive them just randomly across the floor.  He must find "tracks".  Something relatively narrow with boundaries.  If there is no track, he will sometimes try to make a track.  When he was just over a year old, he would do this using Doug's ties.  He would lay a tie out roughly in a circle and then drive his cars around it.  He also has great balance and impressive agility (especially considering how solid he is--I always expect him to lumber more), but he has always been extremely cautious.  He just seems to be more aware of physical consequences that most other kids his age I have been around.  Until now.  A few weeks ago, he figured out (finally) how to get in and out of his crib on his own, and now he thinks he's completely invincible.  Apparently that was the magic bullet.  He used to be an excellent sleeper.  By the time he was a few months old, he only ever woke at night to nurse (only ever conscious enough to suckle, which doesn't take a whole lot of brain power) and has always willingly and easily gone to bed at night and taken trouble-free naps.  Now every time I put him in his crib to sleep, he crawls out, dumps all his cars out of the bucket and starts driving them on the door while he screams at me to let him out.  He has a plastic pirate sword and one day when he sounded particularly desperate to escape I went up to check on him and found him furiously stabbing the sword at and under the door in an attempt to be freed from his awful prison.
He's FINALLY starting to talk.  The last couple of weeks he's been repeating word more frequently.  He calls Keilana "Nana" now and has added "shoe" "arm" "Yaya" "night" "jump" and "I donwanna" to his small vocabulary.  He had a half a dozen or so words already, but its nice to see him trying to start talking.  Its about time!
Posted by Rebecca Susan at 2:59 PM