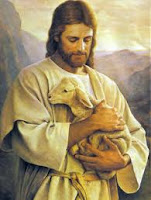 Last week, my oldest daughter asked me what Palm Sunday was, and in the process of my explanation I told her briefly the story of the Passover holiday that the Jews were celebrating that week.  I believe that it was very much by Divine intent and design that it was on the night of the Passover Feast, when the Jews were celebrating their delivery from physical death and slavery to Pharaoh, by the blood of sacrificial lambs, that the Lamb of God sweat great drops of blood in the Garden of Gethsemane and delivered himself up to be crucified:  this time to deliver His people from eternal, spiritual death and slavery to sin.

The Atonement is, to put it simply, love—in its strongest, purest form.  The Savior is a precious friend, indeed a perfect friend—the one soul who always sees us with complete empathy, who always understands exactly how we feel and what we are going through.  The Savior is the one person who always accepts us just as we are, loves us without reservation, and forgives us any failing, no matter how grievous the sin, if we but ask his mercy and do whatever is in our power to rectify the mistake and leave it behind.

The Lord went through such immense pain, so overwhelming that it caused even Him, “God, the greatest of all, to tremble because of pain and to bleed at every pore” so that he might satisfy the eternal demands of justice and pay the price for all sin, for every sin.  He bore the consequences of our decisions that he might have the power to offer us mercy and a chance at exaltation.  It is the promise of forgiveness that makes personal, eternal progression possible.  Elder Jeffrey R. Holland once wisely stated: “Unless we believe in repentance and restoration, unless we believe there can be a way back from our mistakes–whether those sins be sexual or social or civil or academic, whether they be great or small–unless we believe we can start over on solid ground with our past put behind us and genuine hope for the future–in short, if we cannot believe in the compassion of Christ and His redemptive love, then I think we in our own way are as hopeless as Macbeth and our view of life just as depressing. We do become shadows, feeble players on a perverse stage, in a tale told by an idiot. And unfortunately, in such a burdened state, we are the idiots”.  The Atonement shines the brightest light into the darkest corners, reminding us that no matter how immense the mistake, there is a way home, there is a path to peace and happiness within our grasp.

He also chose to have such pain inflicted upon himself that he might know each and every misery we might experience, so that he could provide the comfort that each of us so desires—and needs—to weather the challenges of mortality.  Elder Neal A. Maxwell, who experienced several painful bouts of cancer, and treatments nearly as painful as the cancer itself, once said that  “If the only kind of pain he experienced was mine, he loves us more than we know”.  But it wasn’t only physical pain that he suffered.  Yes, he trembled and bled and needed the ministering of angels—there is no physical pain we can experience or imagine that would compare to what he suffered for us—but he also suffered every emotional and spiritual pain: during the most agonizingly painful hours in human history, his friends fell asleep, as he painfully asked,  “Can ye not watch with me one hour?”; he was betrayed to death by one of his most trusted friends;  most of his family rejected him during his earthly ministry; when he was arrested and condemned, his friends denied that they knew him; he had to see his mother’s anguish and she watched her beloved son be killed;  as he hung on the cross, tortured and exhausted, he felt the desperate pain of Divine absence, crying out anxiously, “My god, my god, why hast thou forsaken me?”

When he finally, triumphantly, declared, “It is finished” and was mercifully released from his earthly pain, many of his disciples lost faith.  They thought he had come to deliver them from Caesar the way he had delivered them from Pharaoh.  They did not yet understand that there are types of slavery much more destructive than that inflicted by oppressive earthly kings.

But he was not defeated, and he had work yet to do.  After observing the Sabbath, Mary Magdelene returned to the Garden Tomb to attend the body of her Lord, only to find the tomb empty.  Thinking that those who had slain her friend had heaped gross insult onto injury by removing his body, she tearfully surveyed the empty tomb, and then heard a kind voice ask, “Woman why weepest thou?”  When she replied that they had taken away her Lord and she knew not where to find him, the same kind voice called her by name, and suddenly she realized it was the Lord to whom she spoke.  The precious friend that she had watched die upon the cross stood before her, alive.   As the angels said to the disciples, “Why seek ye the living among the dead?  He is not here, but is risen.”

Risen!  He had conquered spiritual death, and now he stood here before them, having conquered physical death.  He laid down his life, and he took it up again, his body renewed and perfected.  And yet, he bore marks of identification.  He had retained the marks of the nails in his hands, feet, and wrists.  He bore the marks that evidenced his tremendous love for us.

Part of the reason that good-byes are so hard, especially death, is that some part of us knows, not just feels or believes, but some deep part of our spirit retains an instinctual understanding that such separations are not how things ought to be—that they shouldn’t, can’t, be permanent.  Because the Savior suffered in Gesthamane and Calvary, and completed His work with the glorious triumph of the Resurrection, we have hope that those separations are not permanent.  In the mortal sphere, life seems so fragile, and death so permanent, but because of the glorious miracles that we celebrate each Easter, we can know that it is in fact exactly the opposite:  physical death is not an end, but a transition; it is not permanent, but merely a temporary state of preparation and work.

Our loving and wise Heavenly Father wanted, like any good parent does, for all of us, His children, to have all the things that He has.  But just as our mortal children cannot properly progress and “grow up” and achieve the best things in life if we always keep them at home and make most of their decisions for them, our Father in Heaven knew that he had to send us out into the wilderness to learn and progress and grow up.  He knew that his as yet unperfected children would make a lot of mistakes in the process of growing up and that the consequences of those mistakes, in a eternal world governed by perfect justice, would be too much for the His children to bear alone.  There was need of a Savior: one child who could live flawlessly and accept the burden and the incomprehensible pain of the sins and missteps of all the others.  A generous and kind older brother stepped forward and said, simply and without fanfare, “Here am I; send me.”  More loving words have perhaps never been spoken at any point in all eternity.

I do not understand how Christ did what he did.  But I trust that He did do it, and that because He did, I can be forgiven.  I have experienced His comfort and assistance far more often and to a much greater degree than I deserve.  Such is His mercy.  One of my favorite hymns contains the phrase, “O to grace, how great a debtor daily I’m constrained to be”, a thought that regularly floods me with gratitude, and with greater forgiveness for the imperfect people in my life.  It gives me hope, and such great peace, trusting that, through His redeeming sacrifice I can not only get better, but eventually become perfected, be reunited with my Heavenly Father, and with all those that I love and cherish but must eventually part with in this mortal sphere.

One of my favorite scripture, that I turn to again and again when the noise of the world grows too loud or I feel I have made terrible mistakes, is found in Isaiah:
“He is despised and rejected of men, a man of sorrows and acquainted with grief. . .he hathe borne our griefs and carried our sorrows. . .he was wounded for our transgressions, he was bruised for our iniquities, the chastisement of our peace was upon him and with his stripes we are healed.”  Because of that, every faithful effort can be sanctified, and every mistake left behind.  That knowledge fills me tremendous gratitude, great hope, and comforting peace.

In an ever changing and uncertain world, that it is the only meaningful certainty.  As President Hinckley once said, “We know not what lies ahead of us.  We know not what the coming days will bring.  We live in a world of uncertainty.  For some there will be great accomplishment.  For others, disappointment.  For some, much of rejoicing and gladness, good health and gracious living.  For others, perhaps sickness and a measure of sorrow.  We do not know.  But one thing we do know.  Like the polar stars in the heavens, regardless of what the future holds, there stands the Redeemer of the world, the Son of God, certain and sure as the anchor of our immortal lives.  He is the rock of our salvation, our strength, our comfort, the very focus of our faith.”

"The Lord hath redeemed my soul from hell; I have beheld his glory, and I am encircled about eternally in the arms of His love."

May you feel His forgiveness for your shortcomings, peace for your troubles, comfort for your aches, strength for your weaknesses, and love for all that you are.
Happy Easter.
Posted by Rebecca Susan at 1:00 PM