Saturday was one of those don't-have-a-lot-of-gas-money-but-want-to-get-out sort of days, so Doug and Dylan got up before everyone else in the house (even me) and ran to the store for some breakfast food and picnic supplies, and packed a lunch and some snacks while I got all the little girls ready, and we headed to Grant-Kohrs ranch in Deer Lodge (only about 25 minutes from home). In the 19th and early 20th century, it was a massive, very profitable cattle ranch, and is now a national park (you can check out the details here).  After touring the ranch house (someday I'm going to recreate that house's dining room in my house), we explored the rest of the ranch.  The kids wandered in and out of bunkhouse row, checking out the cowboys saddles and dining area and little, cramped bedrooms.  All Keira cared about pretty much the whole time we were there was the horses: 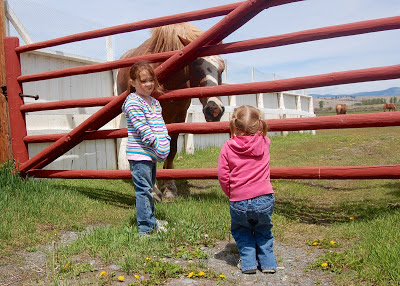 Any time we dared spend time anywhere else, she got rather annoyed and would just continually yell, "horses! horses!!".  The big draft horses were pretty friendly--I'd almost forgotten what massive creatures they are.  Keira and Kylie both climbed up on that gate just after I'd taken this picture so that they could reach up and pet him, and hung out for a while. 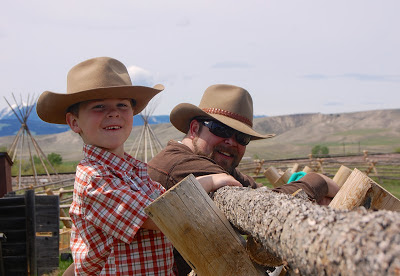 Dylan's Akubra finally mostly fits (he has a giant head), and he was really excited to wear it.  The kids were all insistent that Doug wear his, too, and got really annoyed when he almost wore a ball cap out of the house.  They were checking out the long horns together (there are still quite a few horses and and a handful of cattle on the ranch).

After spending quite a bit of time at the chuck wagon, learning about what life was really like for cowboys out on the trail (always sounded like a rather miserable job to me), and working on the junior ranger packets with the fantastic tour guide that was stationed there, everybody got in some roping practice: 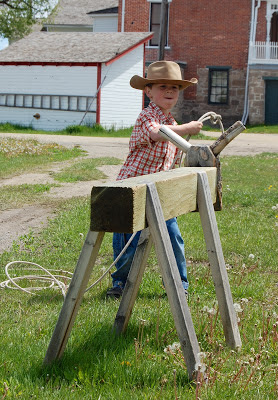 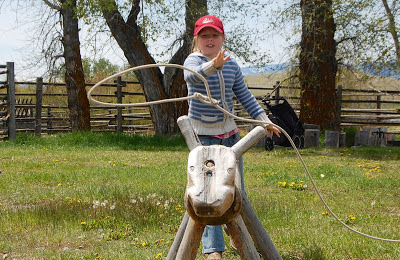 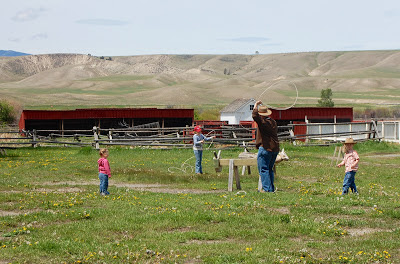 Doug was a little out of practice, and all the ropes were tied for right-handers, but he was doing pretty well by the time we headed back down the trail.

After our picnic lunch, the kids spent some time watching the big long horn steers in the front pasture. 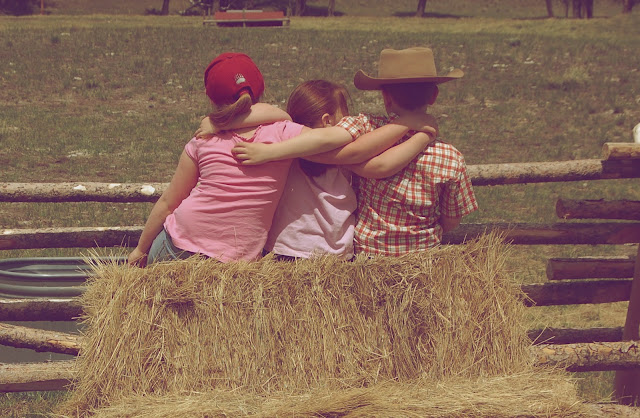 Well, except Keira.  At this point, it was well past nap time, and she was working on finding the perfect  spot in the long grass to exaggerate her pouting.

They run a great summer program that the kids all want to do, so we might give it a shot.  Wagon rides, watershed exploration, wildflower identification, branding and haying.  Sounds like fun.
Posted by Rebecca Susan at 8:30 AM