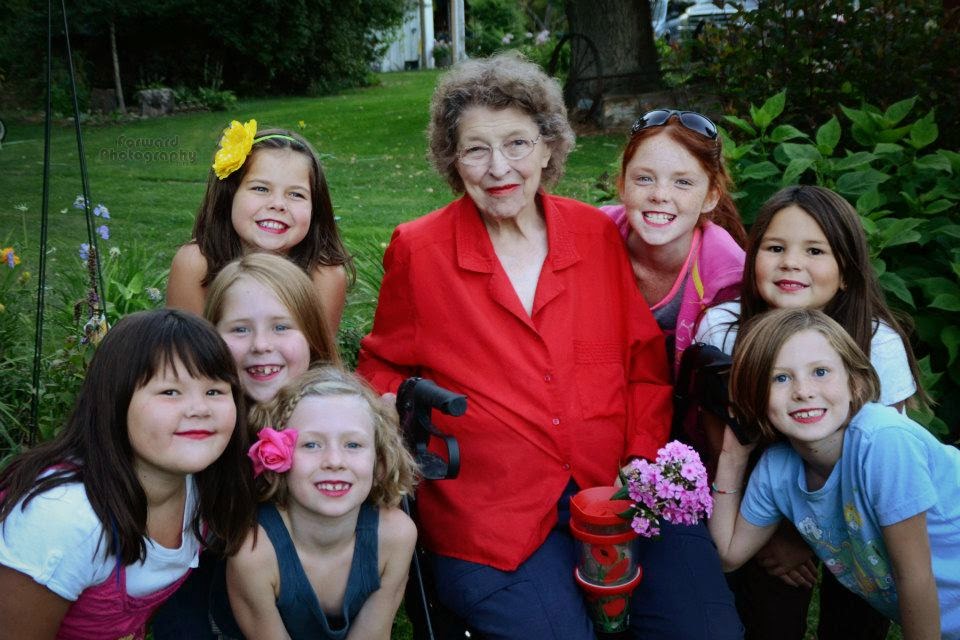 Surrounded by a few of her great-granddaughters, all decked out in red lipstick.

I'm all out of grandparents.  My paternal grandmother passed away a couple of weeks ago.  I'm so grateful that I had the opportunity to be near home for the last few years of her life, and I'm tremendously grateful that my parents chose a life that enabled their kids to build strong relationships with our grandparents.  I can never thank them enough for providing opportunities for closeness with my grandmothers.

Grandma was feisty, which was probably evident in the bright red lipstick and auburnish curls before you ever heard hear speak.  And then she spoke.  She talked too fast, enunciated poorly, exclaimed frequently, and made snap judgments unapologetically.  She could have a quick temper.  About 2/3 of her wardrobe was bright red.  All of that was simply part of her passionate nature.  She loved to dance, she played the violin beautifully, and spent a good chunk of her life elbow-deep in fabric and batting, creating quilt after quilt for kids and grandkids.  With Grandma, you always knew where she stood and where you stood with her.  She always called it like she saw it and you never had to wonder what she was thinking.

My childhood memories of Grandma are all happy ones: delivering Meals on Wheels, running her Saturday errands with her hair in curlers so she'd look nice for church on Sunday, working the concession stand at the movie theater, playing Chinese checkers or making popsicle stick towers on her living room floor while she watched Matlock or Highway to Heaven, giggling at the way she'd pop her dentures in and out a bit during conversations, employing the treadmill in her spare bedroom as an amusement ride of sorts: Michael and I would turn it on and then sit or stand and ride off the end of it, hitting the floor or occasionally the wall, and Grandma would laugh and we'd do it again.  Mostly, that's what I remember:  we were very free to be kids with Grandma.  I never remember hearing a "don't do that" or "don't play with that"--it seemed like just about anything was fair game, and nearly any activity acceptable, and she seemed to have as much fun watching us be rambunctious as we had in being rambunctious.  A lifetime of near-poverty (and perhaps just innate personality) had made her something of a squirrel, always collecting supplies, not often getting rid of things, but she never seemed particularly attached to the stuff--it was there in case it might be needed, but it was just stuff.  She never seemed to worry much about anything be broken or worn out.  As long as we were having a good time, she seemed to be happy.

When I was about 16, I'd been bugging her to teach me how to make all of the treats for which she was well-known, so she told me to come on up and we'd make them all.  I drove to Ronan and spent all day with her, making fudge, popcorn balls, and angel food cake with 7-minute frosting and red sprinkles.  Our conversation ranged all over the place--as it did for the rest of her life--and we laughed a lot.  Much of the conversation was, always, centered around her kids and other grandkids.  She'd say something like, "He's so stubborn, has such a temper," about one, and I'd laugh and respond, "I wonder where he gets that from, Grandma!" And she'd laugh knowingly and say, "Well, I just can't imagine!"  She'd update me on cousins I was in contact with far too infrequently, and talk with excitement about any soon-to-arrive grandkids or great grandkids. When I came home with my haul after a full day of cooking and talking, mom laughed and said, "Is it any wonder she's your diabetic grandma?"  Grandma thrived on many of lives simplest, most delightful pleasures, whether that was a popcorn ball, a blackened marshmallow (the experience really isn't complete unless there is marshmallow all over your hands and face), or rocking a baby.

Grandma loved to rock babies, feed babies, snuggle babies.  Of all the things that Grandma passed on to me, I think my favorites are my dimples, and a feeling that life is good when you're holding a baby.  I often watched her visibly relax and delight with each of my own babies in her arms, and was delighted by the joy of knowing that she loved my children, and that they were cradled gently in arms that once lovingly rocked me.  Grandma's whole life happily and contentedly revolved around kids--her kids, her grandkids, her great-grandkids.  The most joy I ever heard from her came in talking about how great her kids are, and the most worry and concern I ever heard from her was in expressing concern that one of them didn't seem happy.  She wanted them to be happy.

She had various jobs over the years--the movie theater, in-home daycare, etc--but never really had a career.  She was mostly poor most of her life.  She had no significant worldly accomplishments.  And she didn't care about any of it.  At the end of the day, the only things that mattered to her were whether her kids were happy, and if she was fulfilling her calling.

I have never, to this day (and I've now known a few stake presidents, temple presidents and such), known anyone who took their calling--every calling--as seriously as Grandma.  Whether it was Primary secretary, ward librarian, ward chorister, or anything else, it was her job, and she was going to prepare, show up and do it right.

My cousin Annie, Grandma's first grandchild, shared a brief story at her funeral that so perfectly captured who Grandma was.  Annie had come up to visit, and Sunday morning she found Grandma on the floor of her bedroom.  She asked her what she was doing there, and Grandma responded that she had fallen.  And then, with typical Grandma-style feistiness, said, "Well, help me up so I can get going!"  She had so many health problems the last few years, even struggling to get out of bed without falling, but she was ready to get up off that floor and get to Church.  It was important.  And Grandma didn't neglect the truly important things--she gave them every priority.  She had weaknesses and took some falls, but she picked herself up and kept going every time, because she knew where she should be, she was unwaveringly certain of the direction she should be heading, and come what may she was going to keep heading that way.

My grandparents divorced when I was a young toddler, so I have no memories of them as a married couple.  I had heard a few stories over the years that had made me believe that they made each other crazy (though, notably, throughout most of my childhood, they were both usually at our family gatherings, and that never seemed to be an issue).  My grandma had chosen to marry a man who wasn't a member of the Church she so dearly loved, and he had challenges that she struggled with.  Their respective challenges and weaknesses and frustrations seem to have led to a marriage that was often difficult.  Despite all the stories I had heard, I didn't understand entirely what had happened until my Grandma shared a story with me when I was a young women, just after she served as my escort when I received my Endowment.  She expressed joy and pride in my decision, and gratitude that I'd found a good man to be there with me.  She didn't receive her own Endowment until she was middle-aged, and she had been feeling prompted for some time before she took that step that it was time to go to the temple.  So, even though Grandpa didn't seem any closer to accepting the Gospel, she went to the temple, and felt overwhelmingly that she was where she was supposed to be, doing what the Lord wanted her to do, but in that moment she realized that "all the steps I took to get closer to the Lord took me a few steps farther from Lamar, and he didn't want to come with me".  She told me that 20 years after that experience, and how much that realization broke her heart was still evident.

Grandma is simple in many ways--she speaks unequivocally in black and white.  Sometimes I think that because of that, she wasn't given enough credit for how thoughtful she was in much of what she did.  I can't comment on the rightness or wrongness of her decisions relating to her marriage, but I do know that everything she told me spoke of her great desire--despite her admitted stubbornness and reactiveness--to be obedient to what she believed to be true, and to set an example of obedience to her children.  Sometimes that required sacrifices and even heartbreak--but she trusted the Lord.  Throughout my years in California, as our new, young family faced many diverse challenges and leapt hurdles and went through growing pains, she called me often to check in and was a wonderful source of encouragement, always reminding me that I was trying hard to be a good mom and to raise my kids with good things, and I had a good husband who was teaching them and supporting us, so the Lord would take notice and take care of us.  She reminded me frequently that there was never going to be a better time in my life than right then, snuggling babies, watching toddlers explore and growing with my family.  She expressed gratitude all the time for finally having a companion that she trusted to be at her side and support her.  She clearly was so happy to finally have some of her children sealed to her, and to feel more confident than ever that she would get to be with them and hug them again.

Grandma's life was successful.  She made mistakes, she had imperfections, but as her mortal life was drawing to a close, she was so peaceful.  She had no regrets, no feelings that she had neglected anything important.  Because she hadn't.  She had focused with nearly all her energy for nearly all her  life on the only things that ever actually mattered.  Its impossible to overstate how much her firm determination influenced and shaped my own testimony, especially in my young adult years.  I will be eternally grateful to her, the woman who made it feel like it was OK that sometimes I talk too fast or giggle too much.  My enthusiasm for the things I enjoy, which sometimes can seem a bit over the top to some people, Grandma just embraced with her own enthusiasm.  Besides, when we get excited, you can see the dimples more.  How can you not love a good set of dimples?

She rocked me as a baby, she encouraged my creativity and playfulness as a child, she helped me hone my math skills working concessions stands at the movie theater as a tween, she escorted me through the temple as a young woman, and bore her testimony to me often as an adult and talked and laughed me through some of my most pull-my-hair-out type days as a young mom.  Its hard to ask for a better grandma than that.

I miss her already.  But I've never been more confident that I'll see her again.
Posted by Rebecca Susan at 8:59 PM