Kylie was baptized at Mom and Dad's house on April 29th, by her dad. He also confirmed her, with her Papa Umpy, uncle Paul Tanner, and cousin Kenny Krantz standing in. She asked her big sister to give a talk on baptism, 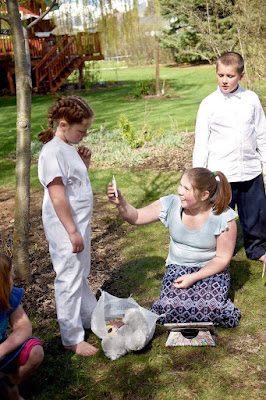 and she asked me to speak about the Holy Ghost 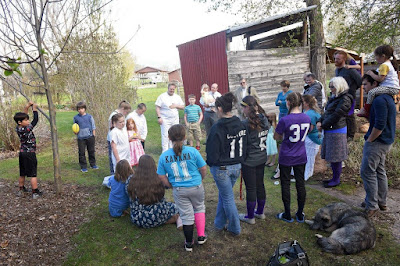 She was so excited to be baptized, and she got to be surrounded by a lot of really wonderful people to welcome her into that covenant and support her.  Most of her Umphrey cousins managed to make it in between softball games (auntie Christa drove back from Frenchtown--and took these photos--and then drove back to Frenchtown afterward, attending tournament games).  Auntie Jen and Uncle Paul drove all the way up from Pleasant Grove with all five of their kids, and then Facetimed in Mimi and Papa, who couldn't make it due to Papa's very, very recent open heart surgery.  My parents were, as ever, our gracious hosts. 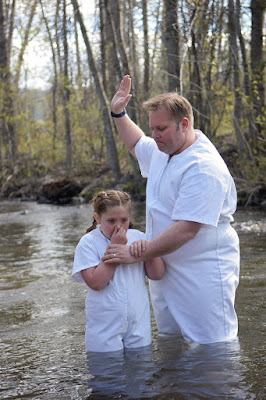 Part of the reason we waited so long past her birthday (which was in December) was that she had requested to have her baptism in the creek.  I'm not sure she was mentally prepared for it.  Her face when she popped out of the water was priceless (I have no photos, because I was standing at water's edge with a warm towel to wrap her up).  When asked if it was cold, she nodded solemnly and said, "Feet are one thing, but faces are different".  All too true, kiddo.

During her confirmation, she was blessed that she would build on what she had already learned about seeking the Lord's direction and listening to the Spirit. Kylie is already a prayer.  During my talk, I told every one about a recent incident where one of our cats, Shawn, disappeared for about a day and a half. Kylie is also a worrier, and she was terribly worried that he wouldn't come home and was very upset. After bedtime, she came downstairs and tearily told us that she and Keilana had prayed that Shawn would be safe and he'd come home.  He showed up a couple of hours later.

At Christmas time, she helped me make salsa, and accidentally touched her eyes after handling habaneros and jalapeños. She said through painful tears, "Mommy, I prayed. I prayed three times."

She's confident and silly, but also very sweet and tender. She's thoughtful and notices the people around her.  She's clever, and tremendously funny. She has a terrible temper, but she knows it and its only because she's so sensitive.  She nearly always takes responsibility for it without being prompted, and feels terrible when she realizes she's made someone feel badly.  She's always trying to make the world around her a little more beautiful, a little more colorful, and a little more fair.

Welcome to the fold, Kylie Bear. We're pretty fortunate to have you.