The other day, a friend said, "I keep forgetting you're pregnant." That's the third or fourth time someone has said that to me in the last few weeks. And I keep sort of having that problem myself. There's been so much going on the last few months, and this seems to be the laziest baby ever, so I keep "forgetting" a bit myself. Suddenly I'm going to have a baby around here and it will catch me by surprise. So I thought this might help me remember: 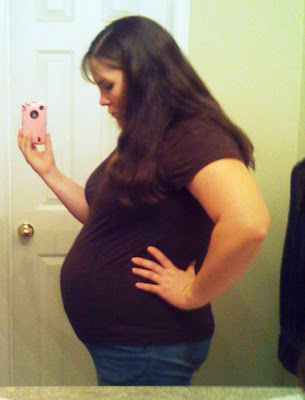 (Sorry about the weird picture. I was too lazy to use a real camera, and then Kylie started pulling on my legs while I was taking it).
Today I'm 28 weeks, so exactly 12 weeks til my due date and 14 weeks til the day we plan on inducing (due dates tend to be somewhat meaningless in my longer-than-average-gestation family). I realized when I looked at the big version of this picture that it looks like I'm sticking my belly out, when in fact I just can't stand up much straighter and actually be comfortable. Its been pretty easy for the most part, other than the annoying and ever-present fatigue. She's sitting a lot lower than Kylie did, which means I already waddle quite a bit, but at least she's not poking into my ribs and decreasing my lung capacity yet.
My midwife is awesome and very low-key, and I've been grateful for that: I've only been in for three appointments so far and don't have another one until after Christmas. It is SO tedious to go to the doctor (especially when you have to leave town and consequently block out an entire afternoon to do so), so when I have no history of complications, personally or in my family, and its the fourth baby and seems to be going smoothly, she just has been really relaxed about everything. I'm so glad that a friend recommended her when I got pregnant with Kylie--she's a great find.
So three months to go! Wish us luck--Kylie LOVES babies, but I'm pretty certain she's going to have a hard time with another little girl overthrowing her reign as baby of the house.
Posted by Rebecca Susan at 4:01 PM

Beautiful! I don't know how you do it all. I have my hands full with two kiddos. I couldn't imagine doing all you do with three kids and a fourth in the oven. :) Amazing.

I was just wondering the other day when we'd get to see a picture of your belly :) I agree with CAllie- you're amazing! I'm still after almost a year trying to figure out how to manage just TWO kids! Your batch of clothes has made it in to a box, is addressed and now has been sitting in my car for at least a week. Hopefully I'll still have some money left to send it when I go to the P.O. to send my other Christmas packages... if not you'll get it eventually ;)