So I've been a bit of a slacker lately, both in taking pictures and uploading them (though admittedly its been worse in the uploading them department), so iPhone shots will have to do today.

The kids had their first day of school for the year on Thursday. Keilana is in second grade, and she was super excited. Her teacher is Mrs. Spradlin, and she was excited that some of her friends that she hasn't been in the same class with since Kindergarten (and that was like forever ago now) are in her class this year. She told me that she had a great first day and that she had lots of fun with her teacher. She's turned into quite a confident and self-assured little girl, and it was fun to see her happily bounce right into class and immediately find her place, easily understanding and quickly complying with her teacher's instructions to her in Spanish.

Dylan is starting Kindergarten and dual immersion, so I was excited to see how he'd respond to the new experience. When we got to his classroom (and found out that he has the same Kindergarten teacher that Keilana did-yay! I love her), Mrs. Samaniego started speaking to him. Entirely in Spanish. All of the sudden he got small, and then turned his body into me. This is such a natural thing for most children, but I honestly can't think of any time I've ever seen him do it. He is either actively, loudly, fighting and kicking against me terrified or unwaveringly confident--I've never seen much of anything in between. When his teacher asked him, "Como te llamas?" I said, "Dylan, that means 'what is your name?' Tell her your name." He turned a little and said, "Dylan." She showed him to his little name card and explained (with motions that made it clear to him what she expected) that he needed to sit down with a piece of paper and write his name. This he knows how to do, and on his way to the table he spotted a couple of familiar faces from preschool and any first day/new language nerves were forgotten entirely, as he started chatting and laughing while writing his name.

When I got there to pick them up, Keilana told me excitedly what her reading level in Spanish was and that she got a sticker for doing the best in math that day. Dylan strutted over to me and when I asked how his first day went he responded, "Great!" I asked if he had any English class yet or just Spanish and he said, "I just did Spanish today. I learned lots of Spanish today. To say 'turtle', its 'tortuga'. And I learned the Spanish word for 'yo-yo': [carefully shortening and accenting those 'o's] 'yo-yo'."

They're only three days in, but they both seem to be enjoying themselves. Yesterday when I picked them up, Keilana told me that she stayed on the little kid playground to play with Dylan before school started. He smiled and said, "Yep, we had fun!" I'm glad they enjoy each other's company. 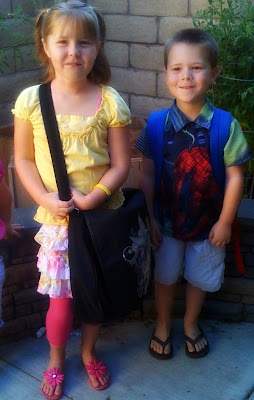 In other firsts, Keira had solid food today for the first time. I've given her a little bit of potato or couscous or banana off my finger before, but she's so very interested in food, I thought it was probably about time I sat down and tried to really feed her. I just threw a can of peas in the Magic Bullet for our first go-round, and it was pretty entertaining to see her trying to figure it out. 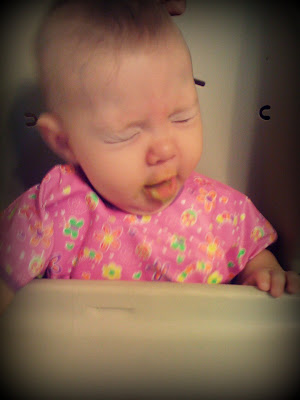 Peas are a strong flavor, and even pureed with water, they don't go down like milk does. 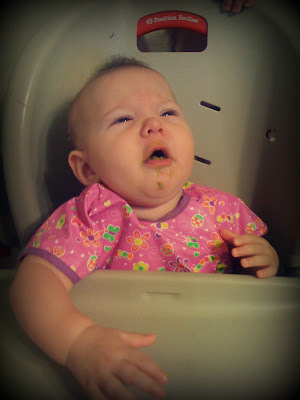 Trying to figure out how to swallow, and use her tongue to help her get the food down, instead of pushing it back out. 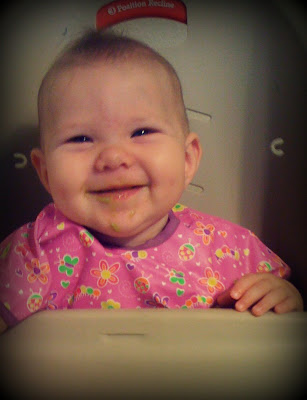 All in all, she enjoyed the experience and the flavor (we even let Kylie spoon a few bites into her mouth for her. I can't believe she's going to be five months old tomorrow. Where does the time go? It really doesn't seem like it was that long ago that I was spooning sweet potatoes into Keilana's cheeky little self on the floor of our furniture-less apartment in SLO. And now she's four feet tall and argues with me about what to wear to school!
Posted by Rebecca Susan at 12:58 PM

Oh My Goodness SHE IS SOOOOO STINKING CUTE!!!. Kelianna has total little girl i'm a girl pose goin on. And dylan just reminded me of micheal i don't know why but that was my first thought. Where is kylie?