She's so smiley and happy. So easy-peasy. 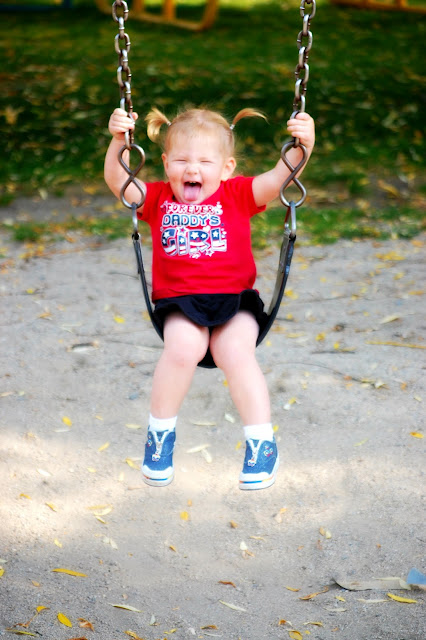 We (meaning the older kids, mostly) joke a lot at our house about Keira being our Irish baby, as she was born on St. Patrick's Day.  As far as the ethnic personality that is projected by or onto the Irish, it suits her.  She has great charm, is quite clever, loves to sing and dance, and is quite affable and generally easy-going.  She loves to laugh, and to make others laugh, and is quite social, usually happiest when she is surrounded by many other happy people that she can play and dance with.  But somewhere in there, she's got an unbendable stubborn streak, and a quick, intense temper.  People don't see that temper too often, but they don't forget it when they do.

She has been such a little gift.  She has all the joy that her older siblings have in their natures, but she lacks their intensity--she doesn't have Keilana's intense, manic energy, or Dylan's intense focus or moodiness, or Kylie's intense attachment or emotional sensitivity.  She's somehow at once both mellow and gregarious.  She's one of my more affectionate children, but less attached--happily spending the night with babysitters, or traipsing off to a new nursery class the first time we're in a new ward where she doesn't know anyone.  She wears her heart on her sleeve, but doesn't bludgeon you with her emotions.  Her's hoping she stays so delightful, always.
Posted by Rebecca Susan at 8:38 AM