Life in the Village

Doug often teases me that where I grew up doesn't count as an actual "town".  Its a hamlet, he says.  I guess it qualifies.  The official population as of the 2010 census was 849.  Take into account the surrounding area, not included in the city limits, and I imagine you're well over 1,000--maybe even the 1200 range!

There are a lot of challenges to living someplace like that.  Its hard to hide, if hiding is what you're inclined to at the moment.  Lots of people seem to know everything about you, or think that they do.  Things like that can be hard to deal with at times.

But in most ways, I have always loved the little-ness of the place.  Since a majority of those who live there are members of families that have lived there for many generations, you often end up feeling like you just have a giant extended family (in some cases, like my family, that is quite literally true).  There are many over-lapping family connections and longstanding friendships between individuals and families, and the sense of community is greater, I think, because you rather quickly become aware of how intertwined your lives are, and how many different ways you depend on each other.  I was keenly aware of this growing up, since both my parents were volunteer EMTs, and I knew many volunteer firefighters and search and rescue workers and other such individuals.  I knew everyone I went to school with--seriously, every one.  When good fortune came to one family, it often blessed many others.  And when tragedy came to one family, it often affected the entire community.

This past summer, a member of the community, and long-time high school basketball coach, was diagnosed with cancer, and the outpouring of support has been wonderful to see.  It has culminated this week in images all over Facebook of guys shaving their heads to show support for their now-bald friend, and entire stands full of people wearing their blue and white "No One Fights Alone" tshirts for Homecoming.

It has reminded me of the first time my village made such an impression on me.  When I was about Keilana's age (a little younger, I guess--I was a second grader) our little town became rather contentiously divided.  I had a hard time understanding why and what was going on because I was so young, but because of my dad's position in the community (he was high school principal at the time) he was right in the middle of it.  All I knew is that a lot of people seemed upset at my dad for reasons I didn't understand, and I was hearing adults and children alike saying hurtful things about my father, and a few family friends, that I knew weren't true.  It was very confusing, because some of the people who were most vocally opposed to my father were people I thought were friends, or were the parents of my friends.

Just a couple of weeks before school got out that spring, three kids (our neighbors, two of them very close friends with my brothers) went for an afternoon joy ride with their uncle in his small plane, and disappeared.  They were missing for ten days.  I remember much of the experience very clearly for a lot of reasons (the youngest child, Jesse, was my twin brother's closest friend at the time, and it was our first face-to-face confrontation with the reality of mortality), but the thing that stuck out to me that week was that for those ten days, the teeny tiny municipal airport was busy all hours of the day, with volunteers of every kind going out on flights and in organized hiking groups, searching relentlessly.  The Missions are rugged and thick with trees and brush--not easy hiking or searching.  The number of volunteers and their tirelessness was astounding to my little not-quite-8-year-old self, and more than that, I saw people who had quite recently been at each other's throats working together without contention or complaint.  It clicked for me that these missing kids were more important to them than whatever grievances they had been nursing--even if they didn't personally know the kids or their mother well.  I realized in watching them that their love was stronger than their anger.  It was the first thing that had made any emotional sense to me in months.  And I realized in that moment, that all those people would've been out there doing the same thing if it were Michael and Eldon and I in that plane, despite what some of them may have said about our dad recently.  I realized I was surrounded by a tribe that would come looking for me if I disappeared, and that was a great comfort after a very confusing year.

Though I still struggle to understand what it must've been like, what it must still be like, for their mother to deal with the reality of such an astonishingly devastating loss, that experience was also the first time that I came to understand, in some instinctual way if not intellectually, the power of adversity and struggle and loss to remind us of our importance to each other.  The people in this little village care about each other, even if sometimes some present hurt or perceived wrong leads them to forget it.  But when it really matters, they'll be there.

Just look at a portion of those who are there for Coach Rice: 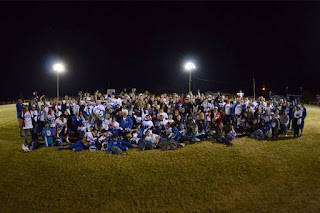 Posted by Rebecca Susan at 9:57 PM