So it turns out that I took more than 650 pictures, not including the 80 or so that I snapped with my phone. Digital can be deceptive that way. So as not to overload you (or myself), I'm sorting through them one "phase" at a time.
On Monday, we decided the kids needed a break and something interesting to see. We'd gotten in the car at about 1pm on Sunday and drove clear to Beaver, UT, with very little stopping. We stayed in a Super 8 and then started on the road again at about 6:30 or 7. So the kids were getting fidgety and so were we. We took a slightly out-of-the-way route so we could see Promontory Point, where the Golden Spike was driven to complete the Transcontinental Railroad. They have working replicas of the two trains that were involved. Dylan was in heaven, explaining to me what all the different parts of the engines were. 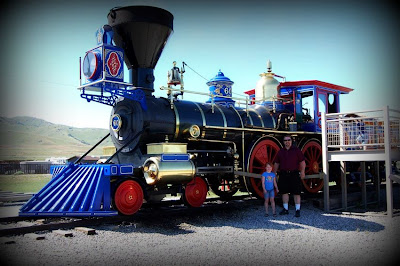 This is Keilana and Doug in front of the Jupiter. Dylan really liked this engine quite a lot, and was rather irritated that he couldn't ride on it. 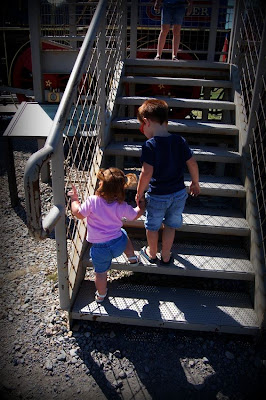 Dylan had one of his rare diligent-big-brother moments, helping Kylie up the stairs. They actually get along really well, Dylan is just usually too wrapped up in whatever he's doing to realize that she needs help with anything. 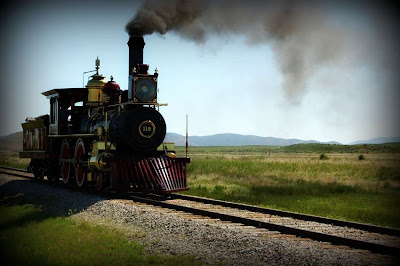 This is the No. 119 train. Doug liked the look of this one a bit better--and we got to see it do a fair amount of driving! 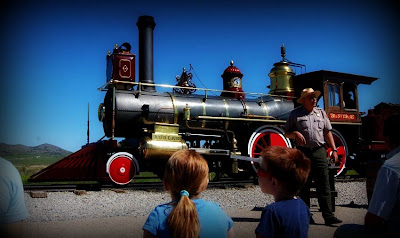 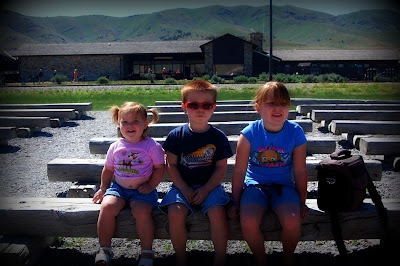 A little car weary, but still doing well at this point. We decided to veer off the wickedly boring I-15 through Idaho route, so at Dubois we hit the 22 and then the 93 at Salmon and drove up the 93 along the Salmon river until we hit the pass and headed into the Bitterroot Valley. It was a long drive, but SO much prettier and more interesting and less stressful than the Interstate. However, it made for a really long second half of the day on Monday. The kids handled it pretty well, all things considered.
More to come.

Posted by Rebecca Susan at 7:49 PM