Something that I really love about Dylan, and something that is very easy to miss because he is so self-contained, is that he is very loving, and accepting.  I noticed his self-contented nature almost immediately (especially in contrast to his older sister--my first baby--who wasn't so much affectionate as she just constantly wanted to be interacted with).  He roomed in with me in the hospital, and he liked to be held.  But in sharp contrast to what I was used to, he was generally perfectly content on his own in the bassinet most of the time.  He's remained that way, generally content where he is, with his own imagination to keep him company, but that doesn't translate into a lack of compassion, interest or concern for those around him.

He adores Keira, and she him.  He was the first person who ever got her to laugh out loud, and is still the person who does so most often.  He will do just about anything to make her smile.  Of any "pair" of kids in the family, these two get on the best.  Dylan tickles her, wrestles with her, even reads to her, and he never expects her to act anything but her age--an innate gift, at an age where explaining developmental levels to kids is a challenge.  He just seems to get that people go at their own pace, and is adept at figuring out what that pace is for each person he interacts with and adapting to it. 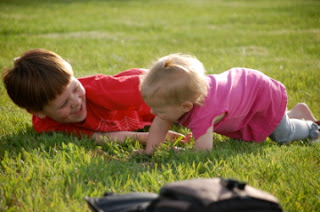 Which leads me to this: 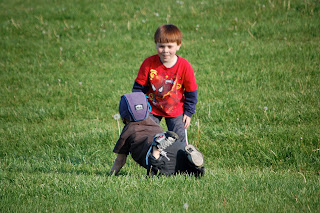 This is Dylan at tonight's baseball game, playing with a boy from his kindergarten class.  This little boy has epilepsy and some developmental delays, and Dylan loves him.  He talks about him almost every day, and loves when he gets an opportunity to play with him.  They had a ball chasing each other around in the grass.  When we first started spending time with the Ashcrafts, and the few occasions when Andrea hung out at our house, Dylan seemed drawn to Andrea.  He would follow her around, picking up her toys for her, and crawl up into her chair and watch her Baby Einstein videos with her, and talk to her. . .or not, just sit quietly with her. He would ask me questions about her.  Last year, he thrived in the the preschool class he was placed in, because of, not in spite of, all the special needs kids in his class.  He made a lot of friends, but spent most of his time playing with the special needs children.  One of them became his closest friend--Dylan played with him nearly every day, almost every opportunity.  When that little boy started the school year, he was barely verbal, but by the end of the school year, he was speaking in understandable, near-complete sentences, and both his teacher and his mom credited a lot of that to all the time that he spent with Dylan.

He's a lover.  Not overtly affectionate by nature, but attentive.  He is that rare combination of self-contained but not aloof, and I love him for it.

I've said often about our little man, and can't think of a more accurate thing to say, "He delights me".  Oh, he does.
Posted by Rebecca Susan at 10:27 PM