Tune My Heart to Sing Thy Grace 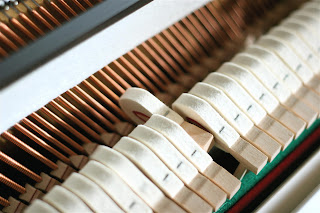 We are raising children in a world that is usually at best apathetic to the things I'm trying to teach them, and is all too often openly hostile to them.  I expect that from the world, and as parents, we do our best to protect our kids from it when we can and try to counter it effectively when we can't entirely shield them.

I realized recently that I sometimes react self-righteously to the views and opinions of members of my own faith because of fear: I am trepidatious about the thought of my kids having Primary teachers or Young Women's leaders, that they love and trust, contradicting what I'm trying to teach them at home, or what they hear the leaders of the Church say in General Conference or local meetings.  In reality, I have never had to worry about that with any of my children's teachers or leaders, but when I hear a member of our faith evangelizing a position or belief that appears to contradict what we have been taught, a momma bear switch flips, and I have a tendency to push back too hard.

I started reading through the General Conference issue of the Ensign that arrived last week, and remembered why I enjoyed President Packer's talk so much.  He told of a couple of incidents this spring, where a snake had eaten several of the small finches that nest in the ivy in the garden of his home.  The first time, he thought it was an odd, one-time occurrence, since it had never happened before in the 50 years that he and his wife have lived in their home.  But then it happened again.  He reached this conclusion:  "We will not always be safe from the adversary's influence, even within our own homes. We need to protect our nestlings."

While my self-righteousness is completely inexcusable, it was the fear of that influence snaking its way into my home that drove it.  President Packer continued: "We live in a very dangerous world that threatens those things which are most spiritual.  The family, the fundamental organization in time and eternity, is under attack from forces seen and unseen.  The adversary is about.  His objective is to cause injury.  If he can weaken and destroy the family, he will have succeeded."

Its easy to see what's going on in the world right now and feel outnumbered and outgunned.  It can be easy to feel like the bad men are winning, that the false narratives and bad imitations of goodness are gaining too much momentum and can't be turned back.  When I get to feeling that way, I remind myself how the world must've looked to the Apostles as their Savior hung on the cross, and as they carried his body away for burial:  surely it must've felt like the bad guys had won, that hope was lost, that trying any longer was futile.  And then I remind myself that that bleakest, darkest of all nights was followed shortly by the glorious, triumphant Resurrection.

That story--and the stories that go with it--is the one that I need to be sure my kids know.  President Packer reminded us: "The consummate power of the priesthood has been given to protect the home and its inhabitants.  The father has the authority and the responsibility to teach his children and to bless and to provide for them the ordinances of the gospel and every other priesthood protection necessary. . .I have come to know that faith is a real power, not just an expression of belief.  There are few things more powerful than the faithful prayers of a righteous mother."

As a mother, my energy ought to be focused on trying to "tune my heart to sing Thy grace", to speak of truth with love and gratitude, to bear my testimony to my children and to read scriptures with them, so that my children can more readily recognize the Spirit when it testifies of the Savior's truths.  I need to consistently and explicitly teach my children truth with love so that they will recognize not only truth, but lies.  So that when they hear a deception, it will be to their ears like a discordant note struck on the piano: they will intuitively know that it is out of place.  Hopefully, if they have been taught enough love, they will not make my mistake of being self-righteous, but will remember that the song itself is not ugly and that the musician is not useless.  This is not "Mary Had a Little Lamb", after all--these are the glorious symphonies of eternity that we are trying to learn to play, and it is inevitable that we will occasionally hit a wrong note or get the timing wrong or slip into the wrong key.  Those who are trying to create these lovely melodies with us deserve our patience and love, just as we hope that they will be kind to us when we make mistakes.  After all, if we succumb to the temptation to be contentious with one another, the song will be lost and the adversary will win.
Posted by Rebecca Susan at 2:50 PM