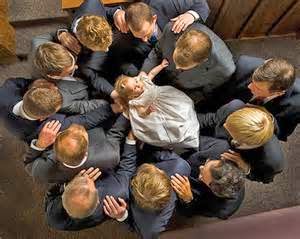 The anniversary of the restoration of the Priesthood to the earth just passed, and I've been thinking a lot about Priesthood authority. Thanks to the Ordain Women organization, female Priesthood ordination is a big issue (or at least seems like one due to the volume of the discussion).

I understand the frustration. I do not agree with or approve of what Ordain Women is doing.  The brethren have repeatedly made it clear that there are certain channels we use to raise and address issues we have within the Gospel and the Church, and I understand why those channels exist and I fully support them.  Having questions is one thing--openly defying the publicly stated requests the First Presidency and the Twelve Apostles is quite another.  The moment you start calling yourself an "agitator" and acting like one, you have lost me.  Once you start staging public protests (media in tow) you aren't trying to understand, you're trying to win.  I cannot support that.  Furthermore, I believe quite strongly that the First Presidency and the Twelve are extraordinarily "tuned in" to what is happening in the world and within the Church, and that they are soft-hearted and responsive, and take inquiries, challenges and sincere desires for further light and knowledge quite seriously.  If I see someone writing (or implying) that they are a bunch of clueless old men who just don't "get it" or "aren't listening", my ability to take the individual seriously immediately starts to dwindle, because quite frankly I just think she's flat wrong.

That being said, I don't think its fair to dismiss any woman (or for that matter, man) who has questions about  women and Priesthood administration, or women and the temple, or any other such doctrine, as lacking faith, being disobedient or an apostate.  While I don't personally know any one who would identify herself as a "feminist Mormon", I have spent a quite a lot of time reading blog posts and discussions by those who identify themselves as such, and many of them are thoughtful, intelligent and seem like decent and mostly faithful sisters.  (Sure, there are some that definitely come off as angry or hurt and looking for someone to blame, or intellectually arrogant and consequently short on faith, but by no means are all the sisters who participate in such forums like that).  Some of the questions they ask are things I have myself noticed and/or wondered about.  Personally, I don't believe that many of the questions are in and of themselves necessarily destructive or out in left field.  But I think, especially in the world of the internet, where you have no idea who is reading what you say, or what the state of their testimonies or understanding might be, one must be very careful not to project personal frustrations or offer pure conjecture as answers to such questions.

Even though I have had some similar questions, or made some similar observations, it has never occurred to me that such things should challenge my faith in my Savior, in the validity and authority of his Church, the revelation and wisdom of the current leaders of that Church or the order the Lord has appointed for his Kingdom on Earth.  Whatever questions I may have or things I may not know, here is what I do know:  I have Heavenly Parents who love me, a tremendously merciful and kind Savior who gave all for my redemption, and the Church is led by inspired, righteous Priesthood leaders who are instructed in and  obedient to the will of the Lord.  There are things we do not yet know, or fully understand.  I'm OK with that.  One of my favorite things about our faith is that there are no Mysteries of God that are ultimately Unknowable.  I believe that Heavenly Father "will yet reveal many great and important things pertaining to the Kingdom of God", and I trust his wisdom, and the obedience and prudence of those he has chosen to lead his children, in the timing of those marvelous revelations.  Usually, the Lord offers revelation as an answer to diligent searching and sincere asking, but we have records of various instances when prophets have failed to ask for those things that were needful, or even tried to ignore revelation they didn't personally find pleasing, and the Lord has had pretty direct and intense ways of bringing it to their attention.   Why would he not do so if the prophet today were failing to address that which was needful, particularly if his other children were diligently seeking and asking?

It seems deeply woven into our mortal nature to look beyond the mark. When I hear women declaring that they should have the Priesthood, there's always a small part of me that thinks, "Have you done your Visiting Teaching this month?  How consistent is your Family Home Evening?  Are you magnifying your current calling?"  In our present division of labor, responsibility and authority, the Lord asks plenty of each of us.  Maybe some of these sisters are nearly perfect in those things, but the truth is that nearly all of us could improve within the stewardships, responsibilities and obligations that the Lord has already blessed us with.  I have not been asked to bear the responsibility of performing ordinances, or with specific administrative or ministerial duties.  But I can fully participate in any ordinance of which I am living worthy, and I have many other duties and responsibilities.  My energy would be better spent striving to perfect the responsibilities I already have than demanding that someone give me different ones.  If I am living worthily, I can call on the power of the Lord for whatever I might need--never have I had reason to doubt that.  If I can call to my assistance ministering angels, not being able to reach my husband or home teacher at a moment's notice doesn't feel like a deal breaker.

But the crux of the issue, as far as those who demand the Priesthood as their "right" is this:  we define the Priesthood as the power and authority of God.  No one has a right to it.  If you demand that you be given the power of God, declare that you have a right to it, you immediately show yourself to be unworthy to wield it.  The Priesthood is not about earthly arrangements of power, and it is not about self-fulfillment.  Its about the salvation of man through the great power of Heaven.  The Lord determines how that authority is delegated, and I am grateful to live in a dispensation where the Lord has given that authority and power to his children more abundantly than ever before.  There are still some gaps on the map to fill in, but we are rapidly approaching the point where any child of God living on the earth can access the ordinances and blessings of that power if they desire it.  What a marvelous time to be alive.  I think there may be sufficient reason to think that how the Priesthood is wielded in the eternities may be slightly different than how it is done here on the earth, but the bottom line is that this is the order the Lord has declared, and I trust that his reasons are good, his purposes can be fulfilled, and that all of his children can access the the power and authority of God unto salvation.
Posted by Rebecca Susan at 12:34 PM