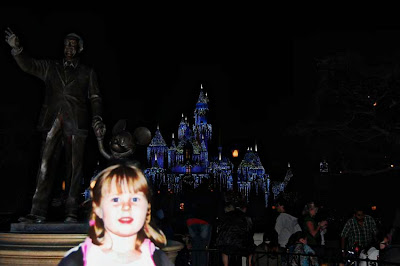 Monday was Doug's birthday, so we left Dylan and Kylie on Sunday afternoon and went down to Anaheim with the Bug. We stayed at the Anaheim Plaza hotel, which is a very cute, affordable option right across from the park if you're ever down that way. (And they let you bring pets, which is nice for us--Ginger came along on our trip, too).
I seem unable to get around to pictures--hopefully I'll get more up here or Facebook. But it was lots of fun. Keilana is absolutely the perfect age for it--she was such a rock star. She was on her feet almost constantly from 8 to 8 and she uttered nary a complaint all day. She kept up. She told me that she was hungry at noon and didn't complain once when she had to wait an hour for lunch. When we nixed the plan to go see the Princesses at the Princess Fantasy Faire because the wait was over an hour, she was disappointed but didn't so much as stick out her bottom lip or let out a tiny whine. She volunteered to go on the Tower of Terror, before we had ever brought it up and was super brave the whole time--pretty sure she screamed less than me.
I've discovered that my daughter is a roller-coaster lover. We hit Pirates of the Caribbean first, and she could see Thunder Mountain from there so she asked if we could do it next. She stuck her hands up in the air for much of it, even though it meant her puny self went sliding from side to side. She went on the Mulholland Madness (which is much less intense but way freakier than California Screamin', in my opinion) and wanted to go again! Once again, arms in the air the whole time. While Daddy took his turn on California Screamin', we were hanging out next to the water checking out Ariel's Grotto across the way and Keilana caught a glimpse of the Princesses. While I was on the roller coaster, she went back with her daddy, and saw Cinderella at which point she shrieked (and we all know how loud Keilana can shriek), "Cinderella!!" Cinderella heard her from clear across the bay and turned and smiled and waved at her. It made her day.
When we took her just a few months before she turned three, she really liked all the characters, but was too shy to go close to any of them, except the Mouse himself on the last day. This time, she walked right up and hugged everybody. She loved "the dolly ride" (Small World), which is pretty fantastic all lit up for Christmas. She insisted she didn't want to do the Haunted Mansion this time and she'd been such a super trooper that we didn't push it. The Christmas Fantasy Parade was much more fun than it would've been without her, I'm sure. She was just enthralled (the girl loves music and dance) the whole time, happily bouncing off my lap and pointing as each float came around the bend. She got to be there to countdown the tree lighting and was in awe of the castle (she has finally decided that it is, in fact, Sleeping Beauty's and not her's) with all the snow and icicle lights.
She was so awesome--happy, energetic, eager--that we promised her the next time we go (we're going to try to make it for Dylan's birthday), we will take her to the Princess Faire even if we have to wait in line for 2 hours. She more than earned it.
Oh yeah, and happy birthday to Doug!!
Posted by Rebecca Susan at 3:42 PM

So you and Sam both went to Disneyland the same weekend and you didn't meet up?!

Almost i went on thanksgiving and she went the on monday. I soooooooo wish we would have been able to be there together though it would have been sooooo much fun. Happy birthday doug. Man i'm gonna have to check out that other roller coaster if i ever make it there again i didn't hear about it. anyway love you hope your having a good holiday season

Next time you go try arriving an hour before the park enters. A friend of a friend went and thought the park opened earlier than it did. So they sat in the parking lot waiting for it to open and were invited to be the "family of the day". They got the royalty treatment and even got to be in the parade. I'm guessing that included fast passes too. The kids would love it!