We finally got our tree decorated tonight.  The tree is not a groomed, symmetrical, farmed fir.  None of the ornaments match or coordinate in really anyway, and are thrown on somewhat haphazardly wherever the kids happen to be able to reach.  I couldn't love it more.

Decorating the tree is always one of my favorite parts of getting ready for Christmas.  This simple activity is consistently one of the best reminders of how much love surrounds us.

This year, the tree itself was a gift.  A man in our ward--who has consistently been wonderfully kind to our family since we moved into the ward a little more than two years ago--found out we were still without a tree.  On Sunday, he asked how high our ceilings were, and then showed up on our porch that afternoon with this beautiful 10 foot pine.  He and his wife had gone out after church in the snow (about 3 feet deep where they went) and cut a tree for us.

The ornaments are a mish-mash of thoughtfulness and affection.  There are the little snowmen ornaments and the temple ones from Mimi and Papa.  There's the pewter one from Papa Clark, and the star fish one from auntie Manda.  There are the shell ones we bought at The Shell Shop in Morro Bay when Dylan was a baby.  The black bear ornaments we bought while visiting Cabela's with auntie Jen and uncle Paul. There are the handprint and photo ornaments of various types that the kids have made over the years with me or in preschool and elementary school. There are so many which have been handmade by auntie Christa over the years for all the kids.  The tree skirt wrapped around the base was a wedding gift--made by Grandma Clark, who has now left us. 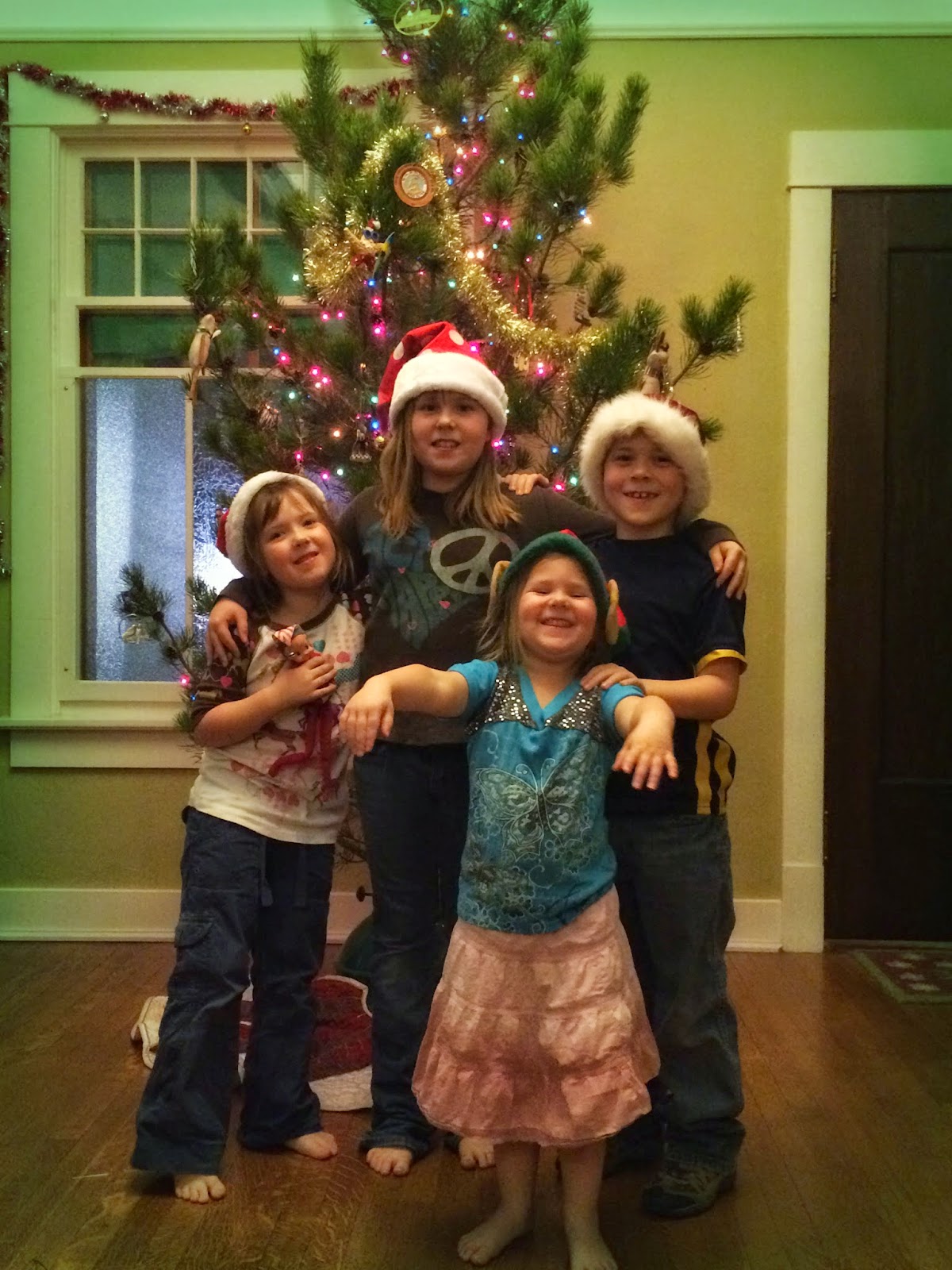 For me, it really doesn't really feel like Christmas until there's a tree up, the living room warm with the soft glow of the lights. 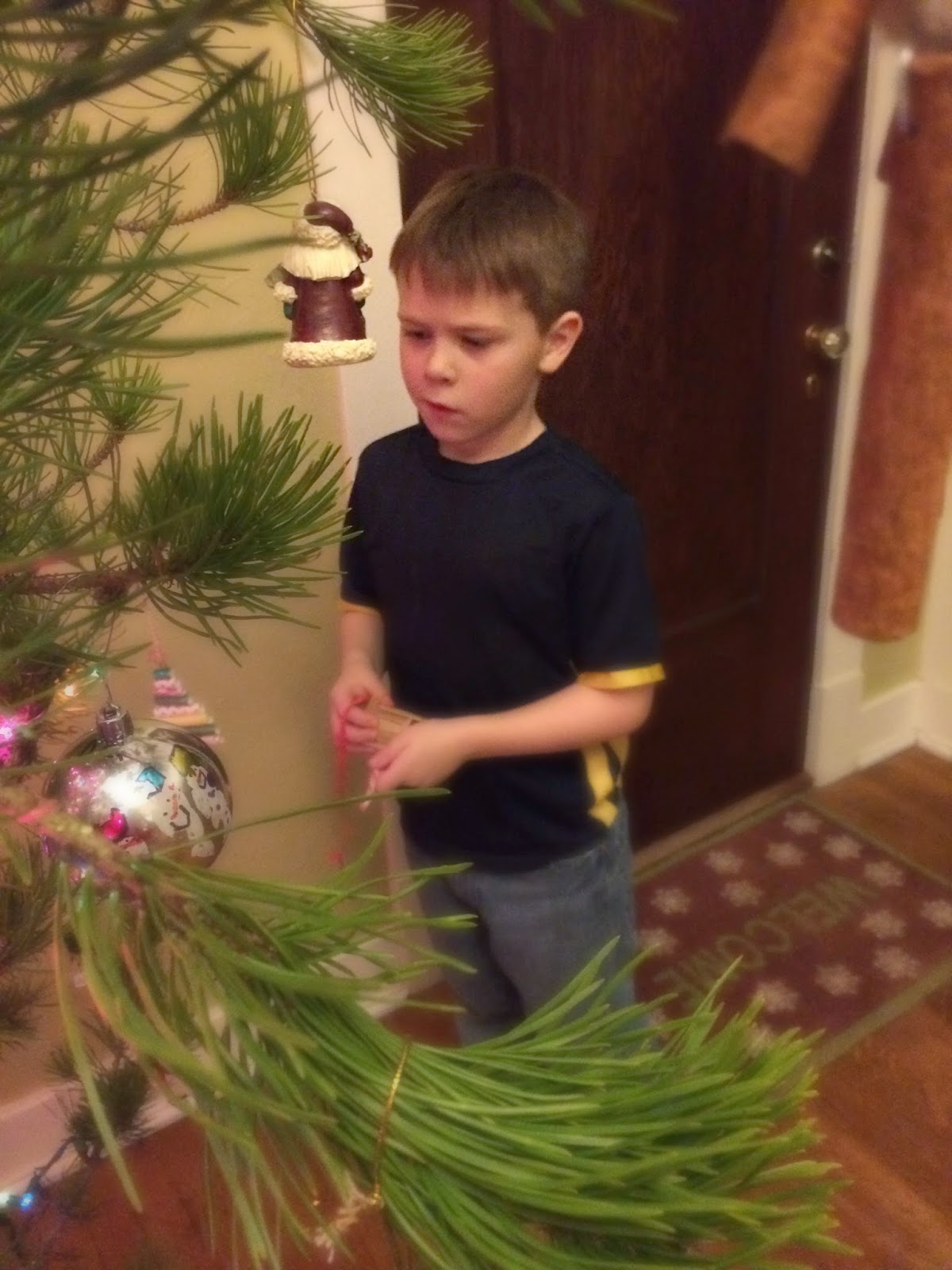 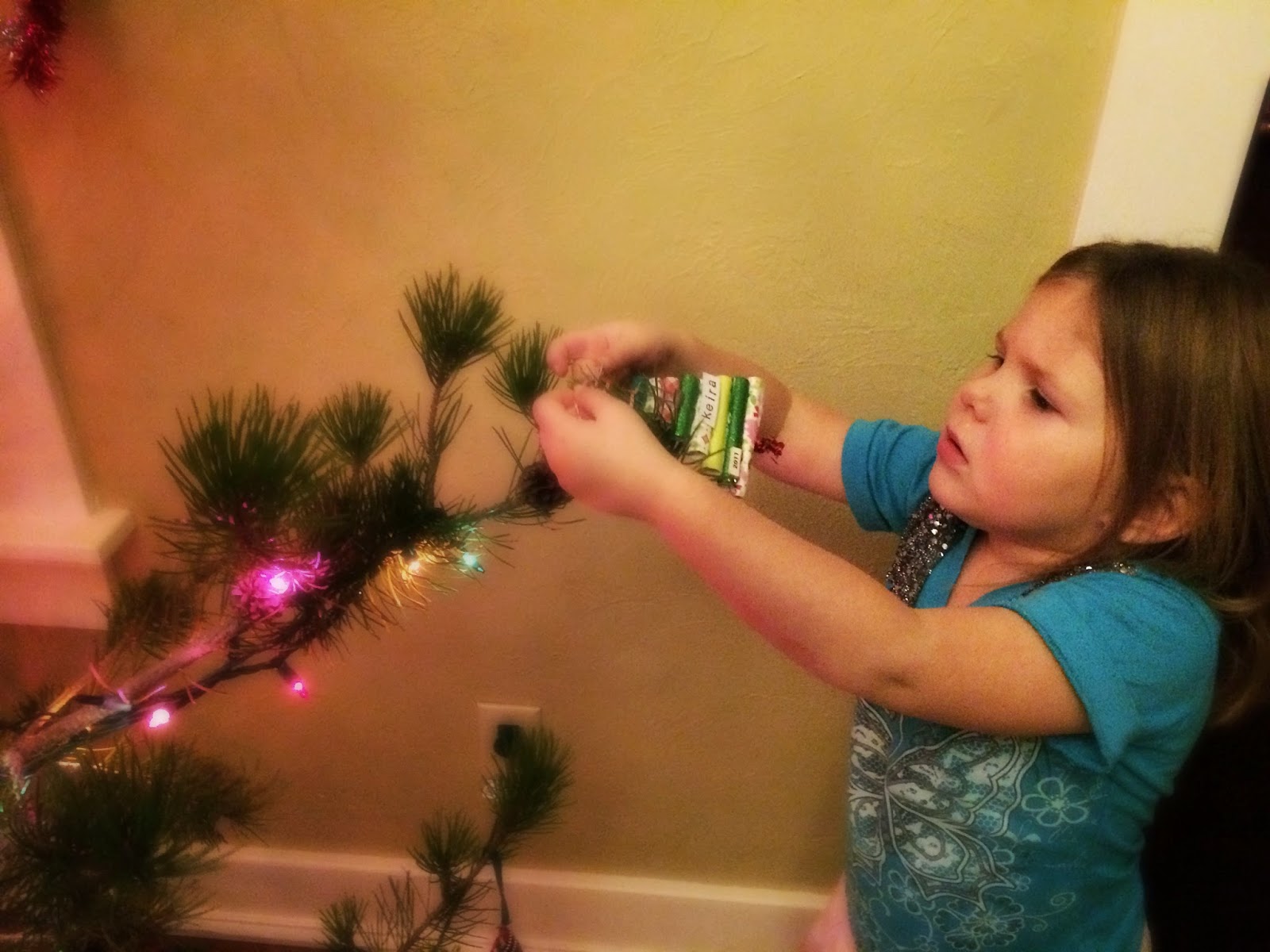 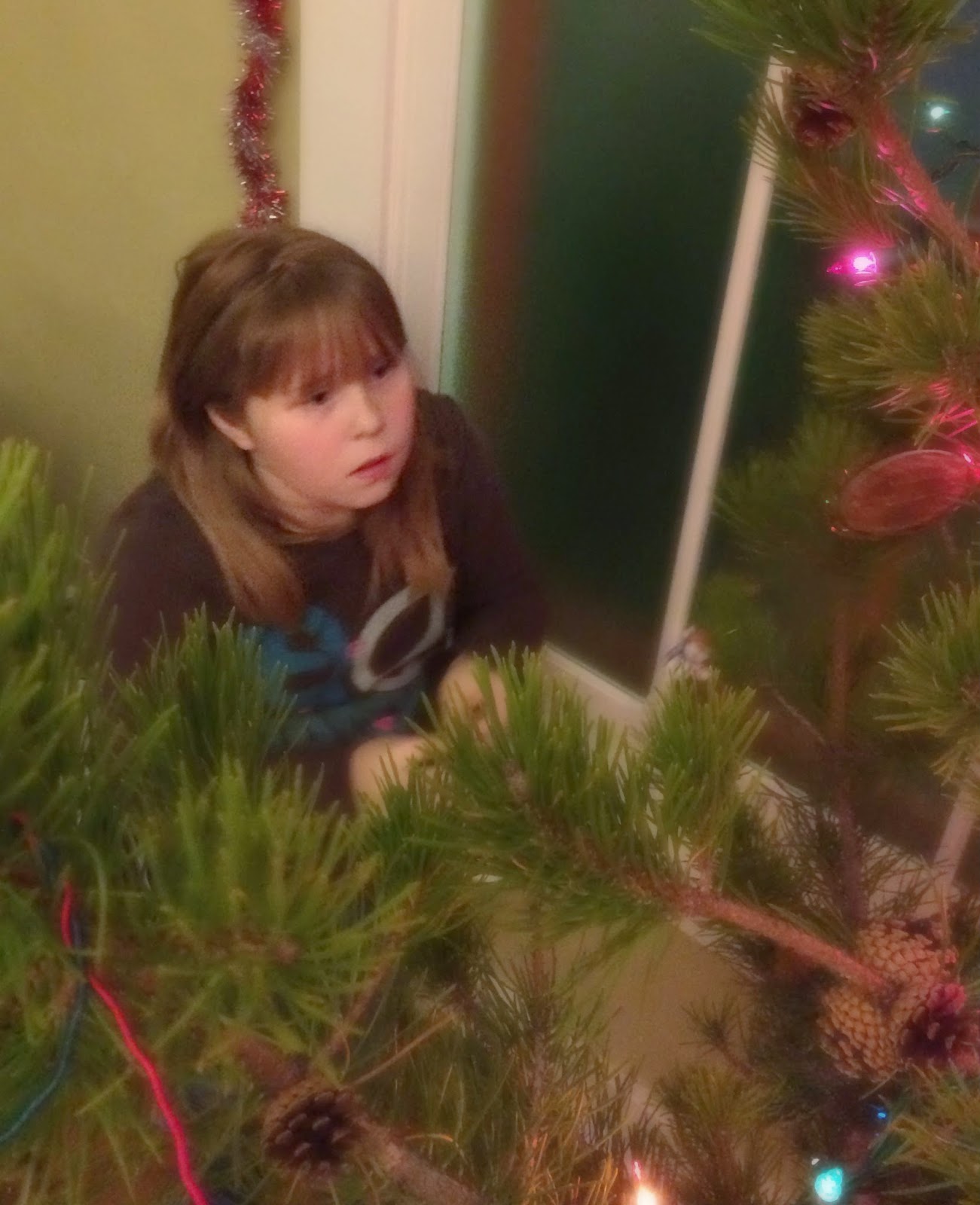 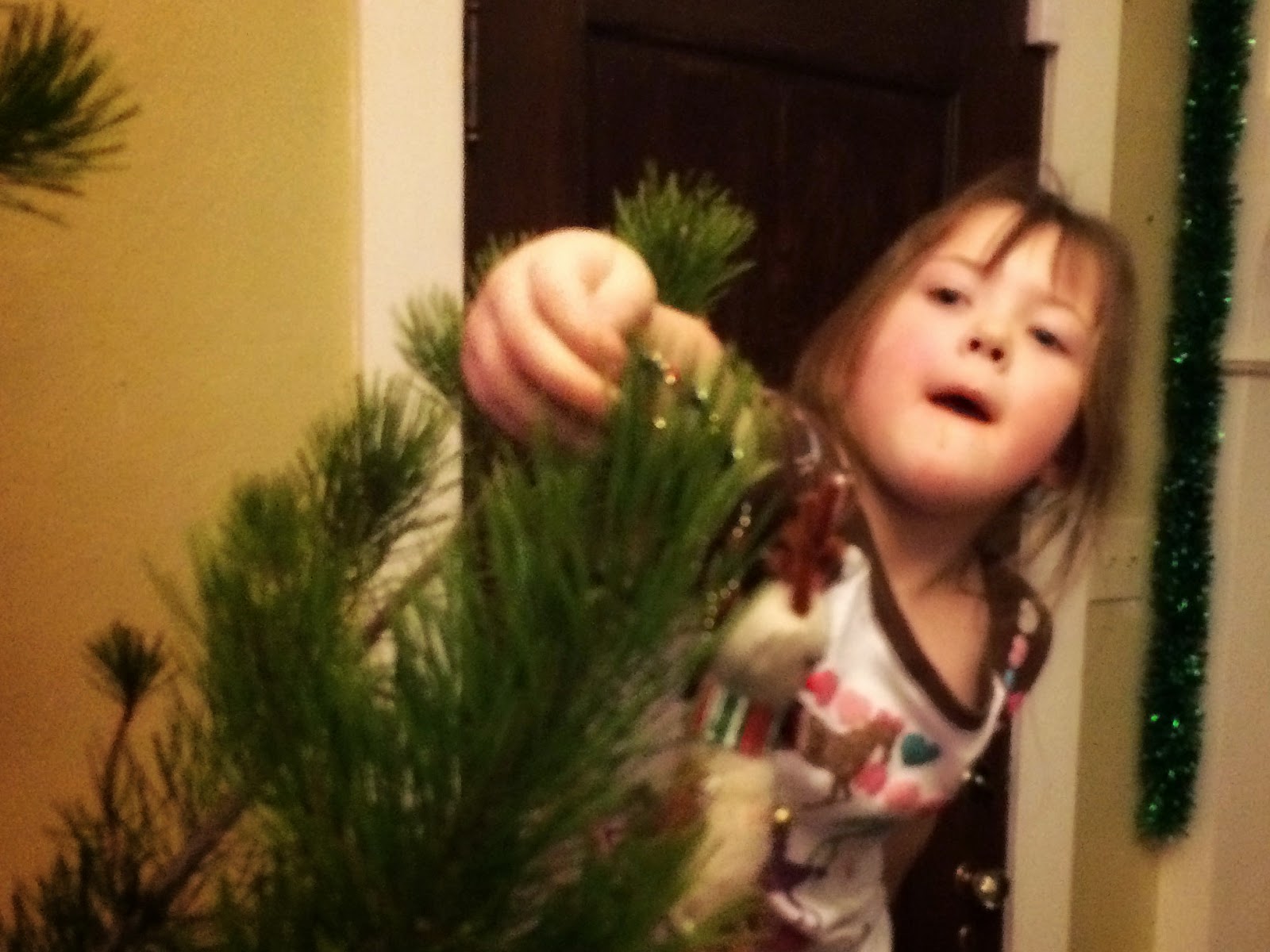 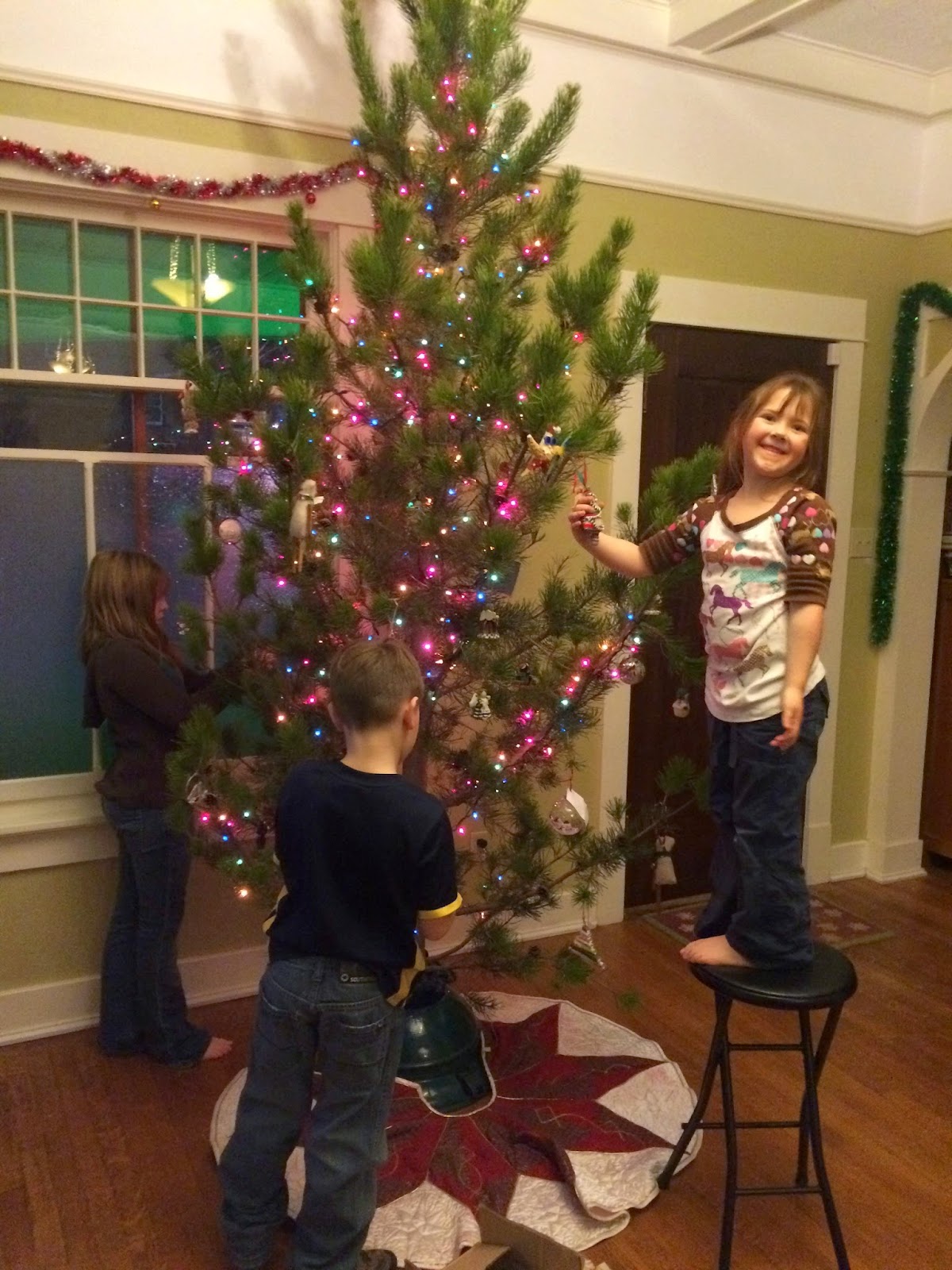 Our tree is decorated with love, in every sense.  The tree itself is meant as a symbol of hope, of love triumphing over death, separation, and sadness.  And the ornaments we hang on it every year are simple little reminders of how much love surrounds our family.  Because I married a boy from a town more than 1,000 miles away from the place I call home, every Christmas since we got married has been spent far away from one family or the other (or both).  The decorations are evidence that we are in the hearts of people we love but can't always be with, and I have always been grateful for the homesickness I tend to feel at Christmas time--I have always known that it exists only because there are so very many people in my life who are worth missing. 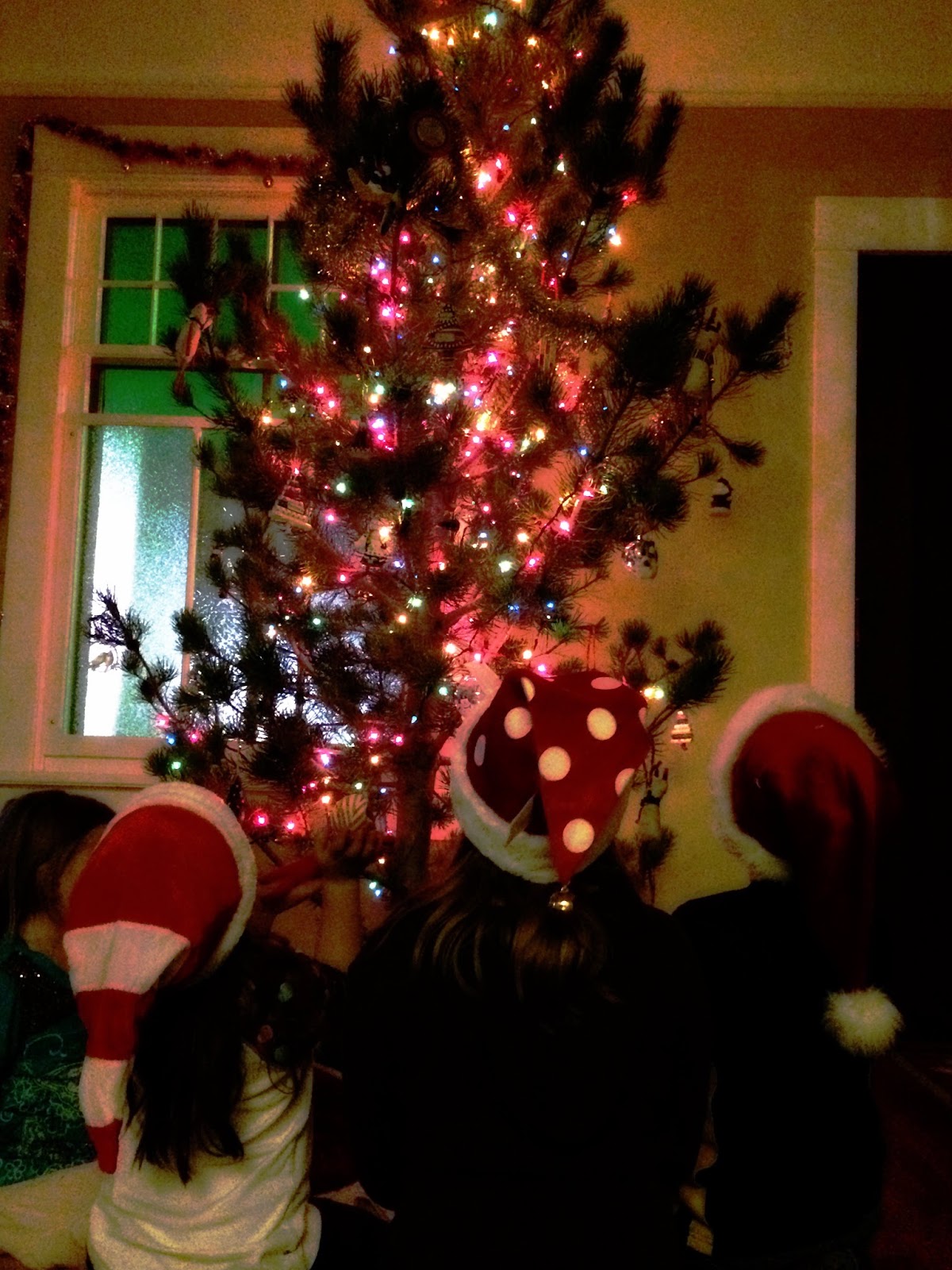 After I put my camera away and started writing, I noticed that one of our elves found a comfortable spot on the window pane behind the tree.  She's an elf that came to us from my Grandma Umphrey. Grandma said she thought the elf was a little younger than my dad.  We lost Grandma just a few months ago, and seeing little Hope (as the kids named her) perched there amongst the evergreen boughs and sparkling lights is a sweet reminder that even the separations that seem so far, so permanent are--thanks to the glorious, powerful love we celebrate this time of year--merely temporary.  I am increasingly grateful for that every year.
Posted by Rebecca Susan at 6:50 PM No comments:

Its Only Been a Month

The last couple years have been hard on my blog.  Its not likely to get a whole lot better the next 18 months.  But then, ah, licensing exam, and a little bit more control over my life again.  Not as much as I'd like in some ways, more than I had hoped in others.

I never meant to be a working mom.  But we started hitting a point where I didn't see any way around it.  And while I love learning and have really been enjoying all the cool stuff I get to do, some part of me (at times tiny, at times all too big) has struggled to be grateful for the opportunities rather than resentful of the need.  I loved being a stay-at-home mom.  There were moments where I didn't like it, but there were never moments where I wanted to be anything else.   It meant making financial sacrifices, of course, but all the flexibility it gave my family (and, yes, me--I have had to learn to be better at saying "no" or at least "not right now") was an advantage that was worth all the trade offs to me.

But then I started school, and suddenly other people had all kinds of control over my schedule and demands on my time that had nothing (directly) to do with my family, and we were still poor but now lacked the flexibility.  I have known all along that that is a temporary circumstance, but it was hard for me to have neither the time I wanted, nor the financial comfort of a second income.  I know, boo hoo.  A lot of couples work a lot more hours and live on less. I know that.  But its been a hard adjustment for me.

The hardest part, in reality, was the shack we've been living in.  Our landlords have been great, but this house is 100 years old and no one has put any significant time or money into it for three decades or so, and it shows.  The layout is awkward, making it feel even smaller than it is, there is no storage and not enough outlets in any room, the kitchen is small and is also the laundry room, the plumbing is only semi-reliable and the heat has had its quirks and down time, too.  The floors aren't even (no, really), the wall paper is pealing or ripped in several places, the floors and carpets are a mess, there is really nothing that could reasonably be called a "yard" (even after hours and hours of work the first two falls and spring we were here, its little more than a 10' x 15' dandelion/rose patch).  To top it all off, it sits in a mostly commercial area, on one of the two main one-way arterial streets in town, directly across the street from a car dealership, and bookended on our side by two bars.  I complained about it too much.  I felt trapped and suffocated by it too often.  I let it have way more control over my mood than I ever should have.  I only ever intended to live here a year, but with the rental market here being almost nonexistent and not wanting (or really being able) to buy a house before I finished school, I had simply resigned myself to starting and probably finishing our third year here.

When I had, after a long battle with myself, finally made peace with being here another 18 months or so, finally felt like I could focus on the copious ways the Lord has blessed us in our time here and be satisfied with it, Doug came home with a key.

An acquaintance was moving on fairly short notice, and had been unable to sell her house quickly.  She knew we had struggled to find housing for our family, Doug had made a favorable impression on her, and she was partial to kids and families, so when she needed a tenant, she came and sought him out.  She didn't require a deposit or last month's rent, just someone trustworthy and reliable who would take good care of the house.  She was only asking enough rent to cover the taxes and save up a bit for some upgrades she'd like to do on the house.  Its a beautiful old craftsman house, on a nice street, a short walk from Doug's office and the kids' schools and several friends' homes.  There is a small vegetable garden, a small garage and car port, a full width corner lot (fairly rare in our old-school industrial town where too many houses tended to be packed on too-small lots).  There's a true master bedroom, a kitchen I won't mind cooking in with the kids, a laundry room, a "kid's living room" upstairs between the kids' bedrooms.  Our dining table and chairs will not constantly be running into our living room couch.

I was exhausted the day Doug came home with the key, or I probably would've started jumping.  That afternoon, he'd come home with the bill for yet more car work.  We'd had a lot of that done the last couple of months, a lot of unplanned expense and after he told me the latest amount, neither one of us had any idea how we were going to do Christmas.  We have never done really big or expensive Christmases--the most presents the each kid has ever gotten in any one year from us AND Santa totaled 6, and those usually weren't extravagant gifts--but we really couldn't see how we were going to do anything.  The kids know that that's the case, and happily say they're fine with it because they get to go to California and do all kinds of fun stuff in May, but there's a difference between a kid saying they're OK with it on a random Tuesday in November, and actually being OK with it early Christmas morning when there aren't packages to unwrap.  So as I sulked over our meager Christmas and our always-too-many bills, feeling a bit overwhelmed and bogged down, this giant burst of light broke through my cloud.  And the kids seemed nearly as excited as we are.  They hate that there isn't much space outside for them here, and that they basically are living on top of each other because of the lack/arrangement of inside space.  I think they feel almost as crunched as we do.  When we took them through the new house last Saturday night, they were so excited that they were driving their Dad nuts.  Maybe a nice house and the anticipation of the Fresno Zoo and the Monterey Bay aquarium and all those fun Clark cousins they love so much really will be enough Christmas for them this year.

I know that, my ever-growing amazon wishlist notwithstanding, its definitely enough Christmas for me this year.  I have a full day of clinical tomorrow, for which I haven't completed my drug cards, and a comprehensive exam for pharmacology on Friday that I should probably be studying for, but I just had to take a moment tonight to record how grateful I am for our blessings.  I haven't been as good at seeing them this last year as I should, but the Lord has continued to poor them down anyway. Its been 2 years of living in this shack, and three years since I've been to California and seen most of my friends there, but this year I get a reprieve on both fronts, and I am feeling tremendously blessed for it.  Gifts under the tree or not, that ought to make for quite a wonderful Christmas.
Posted by Rebecca Susan at 7:44 PM No comments: