And now, for something completely different

At some point in the next week or two, I will finally be replacing my long-finicky computer, and will thus have somewhere to upload pictures, so I'll post about the kids' 4H fair. In the mean time. . .

Doug left his job at the city in late June.  We haven't missed it. We took off on our two week Utah-California-Nevada-Utah-again adventure, with no work or school hanging over anyone's head. It was fabulous. I took my NCLEX the day we left (we drove up to Helena, I spent a little over a half an hour in front of a computerized test, we made a quick stop to feed everyone, and then drove straight down to the Tanners' house in Pleasant Grove), and then I started work two days after I got home.

School started for me on Monday. So now Doug is taking apart chairs and car seats and whatever else and putting it all back together again completely new, learning the ropes of business, and looking at long term expansion/absorption plans, while I work full time nights on the main floor at the hospital, and now add 18 credits of mostly research and writing courses. The kids start school just after Labor Day. I'll be home from work in time to fix hair and make sure teeth are brushed and get everyone off to school, then go to bed, and will wake up just in time for them to get home from school. On the nights I don't work, I can do homework while my whole house sleeps.  Most weeks days this summer, Doug has taken one or two kids at a time to his shop with him. When school starts, though the kids will be at three different school buildings, all four of them will be within walking distance of both the house and the shop. The little girls will be three blocks up from Doug's shop. Keilana will be one block from home. Dylan will be in the middle.

It's a completely new lifestyle. Both parents working. But both of us with enough flexibility that one or both of us is available pretty much at all times. It's almost certain that, though neither of us intended to be, we will be in Anaconda for at least 5-10 years, and I like the idea more than I thought I would. We're making the adjustments, and we're happy.  All of this has happened very differently, and in some respects so much more rapidly, than we had imagined, but we have seen the Lord's hand blessing and guiding our life.  He had provided avenues we never could have known even existed, much less were an option. We are grateful and busy and satisfied and overwhelmed all at the same time.
Posted by Rebecca Susan at 3:05 AM No comments: 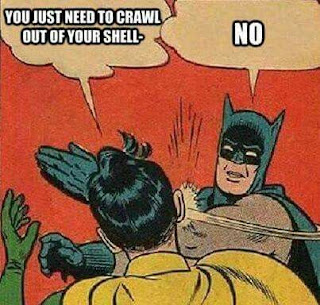 I came into the world shy, insecure, and introverted. I worked hard on overcoming the first two. When I was in third grade, I found out that a classmate thought I didn't like him because I never talked to him, and I was so sad that I had made him feel unliked. So I went about making an effort to be friendly and outgoing. Not just to him, but to everyone. As a small child, if my and my big sister's memories are correct, I didn't make a lot of noise or talk much outside a small circle of the people I was very closest to. In most places outside my home, I hid behind my mom, my grandma, or my twin brother. At school, I developed a small circle of close friends and only interacted with anyone outside that circle when absolutely necessary. I thought of myself as a nice person, so it didn't occur to me until that moment that my challenges affected anyone else.

And so I gradually became outgoing and friendly--in the context of my tiny school (there were 150 students in my entire high school, and I'd known the vast majority of them since I was 5, if not longer). Outside the comfortable familiarity of home, church, and school, I was still quite reserved and quiet. I took jobs in high school specifically because of how they would challenge me to step outside myself. I didn't want to miss anything or anyone I might love because I allowed myself to be hampered by innate shyness.

But introversion can't be trained away. I loved going to school every day. But after six hours of school and an hour of seminary, I was done.  I played one sport a year because I loved the physical activity and being part of a team, but I played only one sport a year because I couldn't bear the thought of spending an extra 2-4 hours every weekday, and more hours on Saturday, peopleing for any more months. Most week days after school, I went home to an empty house. If it wasn't empty, I often went for a drive, or holed up in my room, or found an empty spot in our blessedly ginormous yard. I didn't often do friends during the week. Two weekend days a month, I might go to Missoula to go to a movie or out to eat with friends. But I usually took a weekend off in between. I didn't do parties at all really--outside of school, my socializing was usually 1 or 2 friends at a time and that was plenty. I spent evenings and weekends filling up notebooks with writing and spending very little time talking to anyone, except maybe my mom.

I was very active in my church, and I loved going on Sundays and to Wednesday night activities. But stake dances were not something I participated in. I went to one, the week I turned 14, with my brother and my dad. It was fun. I had no interest in doing it again.  The only other dances I attended were the ones that were an obligatory part of seminary and EFY conferences. I left the dark, loud, crowded gym that felt like an assault on my senses, and spent the evening out in the sunshine having wholesome conversation with some like-minded souls. And I loved that. The only school dances I attended were proms, and I usually ended up spending most of those out in the hall in the light chatting with a couple of friends. Loud, dark, and crowded doesn't work for my nervous system.

I can be insanely chatty with people I am comfortable with, but the vast majority of the time, even in places where I'm very at home (such as with my brothers and sisters), once the conversation involves more than 2 or 3 people, I end up hanging out on the edge, listening more than talking. I didn't often share my writing when I was younger, but when I did, I grew accostumed to the somewhat dumbstruck look that would appear on people's faces when they read it. The comment that I remember most clearly, from a YW president who read some writing I had compiled for a Laurel project, was "I had no idea there was that much going on up there." It was a compliment, and I took it that way, but at the time it almost felt backhanded. I had to stop and remind myself that I didn't share much, that when I did talk it was often too quickly (a combination of nerves and genes--sometimes I have my Grandma Umphrey's rapid, lazy tongue), and my conversation was usually littered with defensive sarcasm and inappropriate giggling.

But in my mind, the person I was in my writing was me. This is who I really am, who I see myself as. All that other nonsense was just a superficial set of half-developed tools used to make my way through unfamiliar territory, and I sometimes forgot that the person in my mind didn't entirely match the person I appeared to others to be. Not because of any deception, but merely because of a difference in elements and abilities. It took me some time to realize that that was why I loved turtles so much: the me I was when trying to communicate outside my safe little circle, the attempts to be "social" in the ways an extroverted world (especially extrovert-loving school systems, where I wanted so desperately to please adults that I respected) expected me to, was the poor out-of-her-element turtle, lugging that heavy shell around, slowly and awkwardly. I knew instinctively that, as difficult as it could make locomotion in those less natural environments, that shell was absolutely necessary for health and survival. I can peek out, I can lumber around, but I need that shell. And I got that, even if sometimes it felt like the rest of the world didn't. Writing has, for pretty much as long as I can remember, been my water. The shell is still there, but here I can move swiftly and agily, I can navigate without the awkwardness, I can safely and happily stretch out my neck and legs.

As I came to understand that, I learned to embrace that shell. I came to consciously realize how necessary a part of myself it was. People who don't have shells don't always understand that. Sometimes it really bothers them. People who thrive on social interaction sometimes believe that you are somehow not enjoying life or not getting as much out of it or you need to be fixed, because you'd rather sit outside alone than participate in the group activity. I may have spent much of my time intentionally alone, but I have a lot of very deep and meaningful relationships. I try very hard to be outgoing and accommodating to the people in my life. But there's nothing wrong with me. There's nothing wrong with having a sturdy shell. And if you have a shell, or your kid has a shell, don't let someone convince you that that's something that needs to be fixed. Yep, you need to be willing to pop your head out and have a look around. You need to be willing to haul that heavy awkward thing across the sand to live a full life. But don't ever let anyone tell you you have to get rid of it. It protects a sensitive, tender body, and that's OK.
Posted by Rebecca Susan at 12:26 AM 1 comment: