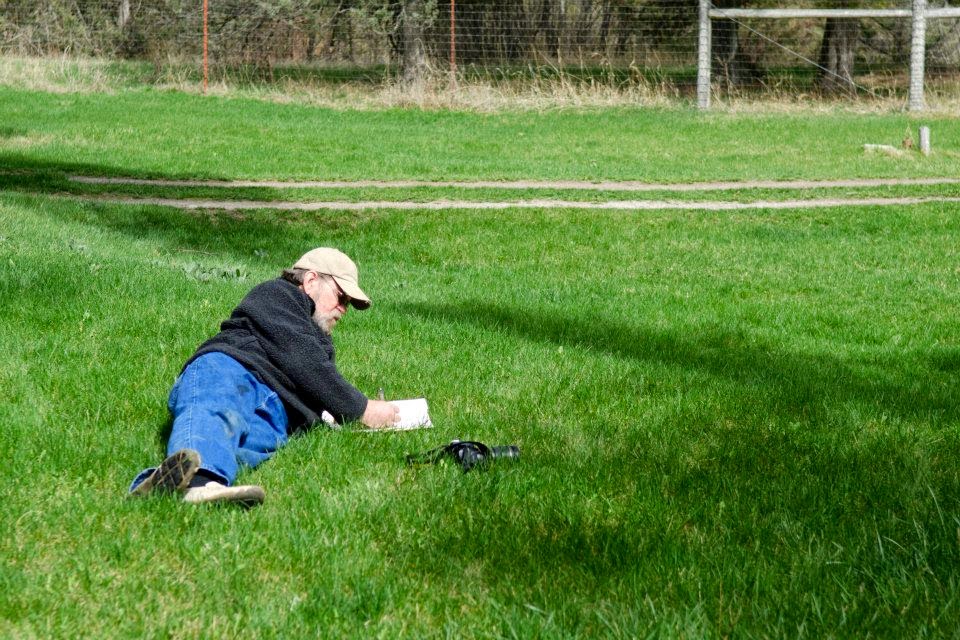 My sister took this photo of our dad last year, but if I dug around long enough, I'm sure I could find dozens of other versions of it from over the years, including several I've taken.  This is the image that always comes to mind when I think of my dad:  lying on his side in the grass, notebook and/or camera near by, and children playing somewhere close, just out of frame.  Though I didn't consciously realize it while growing up, he did a wonderful job teaching me to see, and, by noticing what was around me, to think about those things which were important but not immediately visible.  He taught me to love quiet and observation, and to love making conscious sense of those things around me which were good and beautiful, why they mattered, and to record them.  Those are some of the skills I now cherish most in my life.

I always think of my dad as a quiet man.  Once, when we were teenagers, an adult acquaintance asked my twin brother and I if our dad ever talked, and we both immediately laughed in response.  We had often heard Dad talk at tremendous length about all kinds of interesting things.  But he only speaks if he has something to say.  He seems to approach words the same way that my grandmother saw food:  it was good to eat well each day, and to feast occasionally; but it was sinful to waste and throw away that which could be used to nourish and sustain.

Dad has always had a somewhat subversive sense of humor.  He believes in a higher order, in rules governed by Goodness, but has never hesitated to oppose the pettiness of bureaucrats and political administrators.  He taught me that it was OK to laugh at authority when that authority was, in fact, ridiculous.  As a little girl who was naturally inclined to please and tended to fear upsetting the adults in my life, that is perhaps one of the most important lessons he imparted to me in my childhood.  A few months ago, I thought of him when my little Kylie had a nightmare.  She came to me with tears and explained that we were with Strawberry Shortcake and everyone had to follow the evil Pie Man's mean orders.  I asked, "We did?" and her little face got firm and brave through her tears and she said, "Well, everyone else did, but we didn't.  We didn't follow his mean orders."  And I thought to myself, "Ok, we're passing on the right lessons.  Papa would be proud."

I always knew I could count on Dad with the big stuff.  When I ran a car off an icy road in December, I called him and not only was he not upset, he showed up in his truck, with a smile on his face, and pulled me out of the ditch and then followed me home to make sure I made it back alright.  When I applied to several very expensive universities my senior year of high school, he enthusiastically encouraged me to attend any one of them that I wanted, assuring me that we'd figure out how to make the financial end work if that's what I wanted to do.  But he's been good at a lot of the little stuff, too.  Often, I've mentioned a book I was interested in, or some tool I needed for the house, and a few days later an amazon package would arrive.  When we lived with my parents, sometimes one of my kids would wander into his office late at night, and he'd share his snacks and let them talk with him.  I think every one of my kids has planted flowers with him at some point, and learned some of the names of his thousands of beautiful flowers, and some of the birds that hang around all those flowers and trees.

My kids are too little yet to understand how much work goes in to making Papa's yard so beautiful, but I'm not.  As I watch my kids and my nieces and nephews run around the gardens and climb the trees, pick flowers in the spring and apples in the fall, and create day after day of happy memories in the little Eden he has created around and for them, I'm grateful to have a father who loves his family, who has shown us all that, no matter how beautiful the place you've found in this world is, you can do much to improve on its beauty.  I'm grateful for all the he has done to make the lone and dreary world much less lone and far less dreary for his tribe.  Its much easier to create beauty as an adult if you are taught to recognize it as a child.
Posted by Rebecca Susan at 5:57 PM