My sister acquired a couple of ponies last year, and they're pretty friendly creatures. All three of my kids love horses, have very little fear of them at all, and seem to take to riding (at least initially) quite naturally. Apparently, the genes came through even if their experiences haven't allowed them to spend much time around these type of critters. Doug is a horse lover, as is his grandfather, and my grandpa was a horse man through and through, locally famous for his horse training skills. 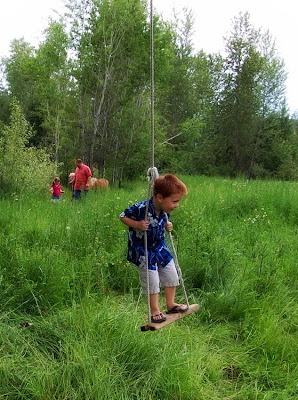 Dylan giving the rope swing a try while Daddy and Keilana round up the ponies. Buck, the plain-nosed fella, isn't terribly friendly. Usually, the kids don't ride him because he is so appropriately named. Dylan gave it a shot (while Doug had a tight hold on the lead). After 12 yards or so, he did start to hop a bit and knocked Dylan off. He didn't fall hard, and only cried for a few seconds before getting back on. 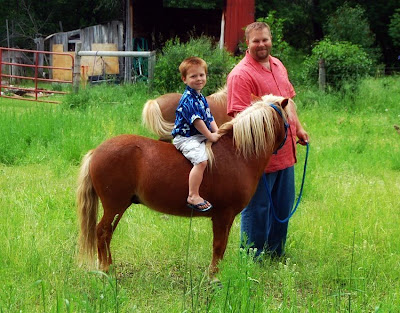 Don't you love their riding-appropriate footwear? Someday we'll get them on real horses. Until then, shorts and flip flops will do. 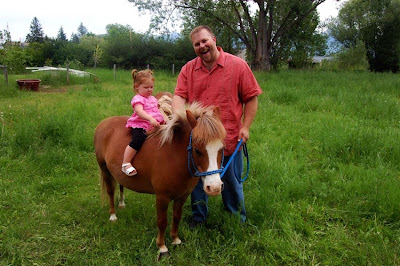 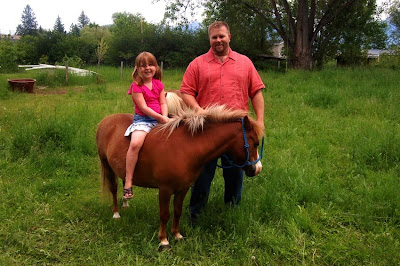 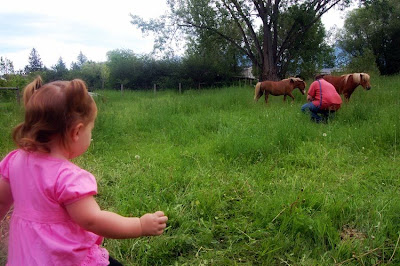 Kylie loved the ponies, and whenever she was outside (which was most of the time), she was trying to get someone to take her to the ponies or to the creek. She is an animal lover in general--I don't think she's ever met a critter she wasn't thrilled to touch and hold. :)
Posted by Rebecca Susan at 2:00 PM