We drove all the way from Salt Lake to Sacramento on our last major "car day", and then stayed in Sacramento that night so we could take some time off from the car and play on the way home. We love Sacramento!!
We stopped at the Sacramento Temple. Keilana has been obsessed with temples since she was about 3, so we try and stop at or drive by one when we get an opportunity (I think that so far the Christmas-lighted-bedecked LA temple has been her favorite). The temple grounds at Sacramento are very cool--lots and lots and lots of lawn covered in oak trees with some walking paths and benches here and there. 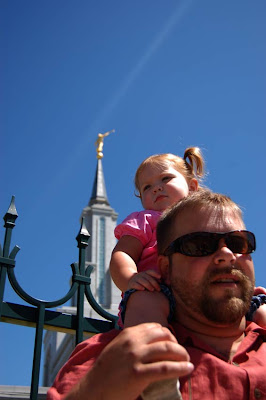 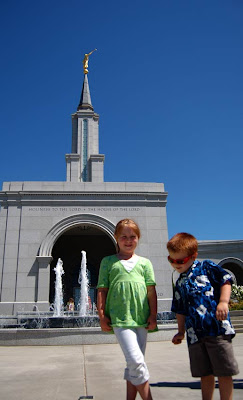 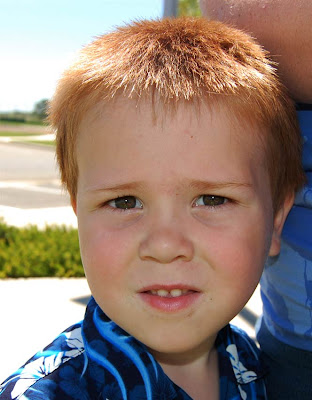 Before our next major stop, we found the LDS distribution center and I bought a new temple dress as a birthday present. The one I had was purchased before I got married, when I was like a size 7. I could still wear it, but let's just say it isn't flattering. I love my new one, so if you're going to the temple any time soon, be sure to invite me so that I can wear it as often as possible.
We spent the majority of our day down in Old Town Sacramento, specifically the California State Railroad museum. The downstairs is a huge room filled with real engines and coaches and freight cars from various points in history. Many of them you can walk through, and Dylan absolutely loved it (Kylie was actually more fascinated by all of it than I expected).
The second floor of the museum is dedicated to toy and model trains. They have a huge running model that has several trains on it, and lots of displays of older toy trains. 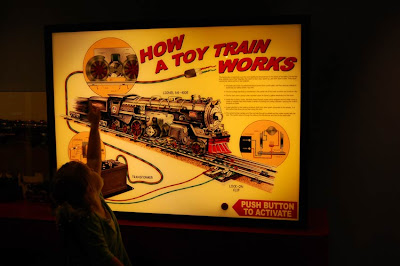 But the kicker is the two huge Thomas the Train tables. The last time we came here, these tables were so overrun with kids that Keilana didn't really play. This time (we came in the middle of the week, rather than on a Saturday), there were almost no kids, so our three had the run of the place. They were all in heaven, especially Dylan. We literally spent a couple hours just letting them play with trains. 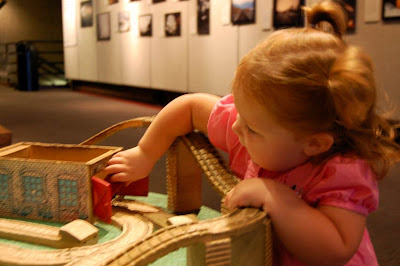 Kylie loved to put all the trains in tunnels and such. But she would pack a whole bunch of engines in and then get mad and tell me "Stuh! Stuh! (Stuck)". She also learned to say "Choo choo" while she was playing. 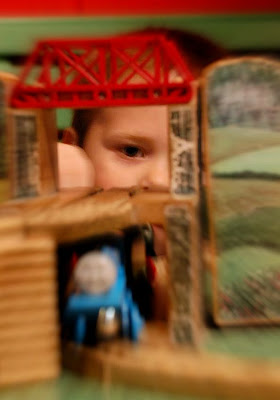 Over two hours wasn't long enough for Dylan. He was quite upset when it was time to leave. This is what he spends most of his life doing anyway, but we don't have any Thomas tracks, so it was a little slice of heaven for him. 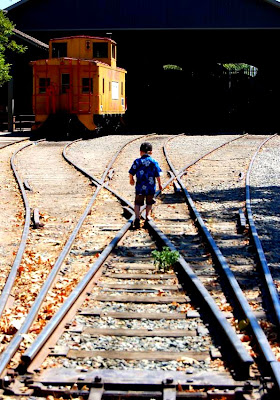 He told me he was being a train. They do train rides along the river, but apparently only on Saturdays and Sundays, so he didn't get to do that this trip. Next time.
Its been a long week, since Doug has been sick since we got home, but its good to be back.
We already miss Montana.
Posted by Rebecca Susan at 12:22 PM